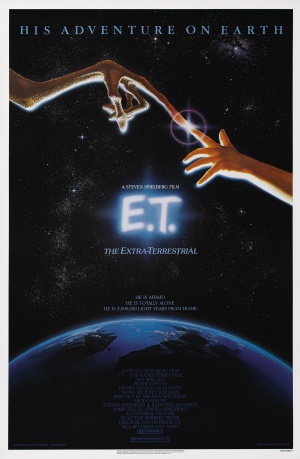 
What really is it that makes E.T. the Extra-Terrestrial out of this world?

When Elliott, an 8 year old boy, discovers a lost extra-terrestrial in his back yard, he takes care of him and tries to help the creature get home.

The film is superbly directed, utilising foggy lights at night time and tense shadowing to add an air of mystery to what is fundamentally, a film based on the unknown. With only one alien to work with for a large duration and no alien world or gadgets, Spielberg does well to convey the creature’s mystery in a thrilling manner by keeping it relative and relate-able to everyday life. This is most obviously seen when E.T. makes a communication device out of bits and bobs around the house.

The film cleverly uses faceless characters to highlight the villains, showing only the chasers’ silhouettes and feet in a dark forest at the beginning and later in the film where they all wear surgeon masks and astronaut style suits to hide their faces. This approach proved brilliantly simple at making us care more for the extra-terrestrial, placing him firmly as a goodie from early in the film and this was important to establish, as aliens before 1982 had predominantly been villains in film culture. Despite this, the film isn’t without its scary moments, accentuated with the alien’s slow movements and heavy breathing, which all adds to the mystery of the creature.

If you were to ask anyone involved in film what their top five film scores were, you might not be surprised to find the E.T. theme tune up there with Jurassic Park and Star Wars. There’s absolutely no wonder why John Williams won an Oscar for Best Music – Original Score for his work here, and it’s clear throughout; the music used really adds to the overall flavour of the film. This is most notable when E.T. saves his new friends when being chased by the government agents; it never fails to build on a scene, always adding character depth and an audible motivation for the audience to will on the protagonists. The use of well placed sound effects also help add a comical edge to the alien, creating some fantastically funny moments like when E.T. gets drunk and ends up burping and making funny noises which underlines the light-hearted friendly nature of our unusual protagonist.

E.T. is both funny and scary in parts, but above all, enjoyable throughout. Now more than thirty years old it hasn't lost the charm it brought to the screen back in '82 and is underlined by its sublime score and terrific characters to complement the loveable extra terrestrial.

Do you think E.T. out of this world or largely over-rated? Let us know in the comments.