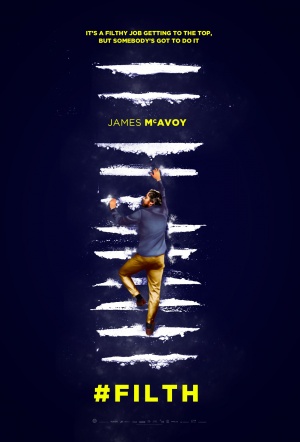 
Will drugs, sex and alcohol prove to be a success for another Irvine Welsh literary adaptation?

Filth follows Detective Sergeant Bruce Robertson who is on a drug and alcohol fuelled campaign to gain promotion in the police force. He spirals out of control in chase of this attempting to save his career and family but it only makes things worse.

The obvious comparison to Filth is Welsh’s 1996 film Trainspotting, with similar vivid styles and excessive drug use to portray the Edinburgh underworld. However, what Filth does differently is place the illegalities more in the every day world of the Edinburgh Police Force, with sex, adultery and drugs all present in this exaggerated version of Scotland. Despite being believable, many of the scenes are far-fetched, creating a fairly realistic world where no one can be trusted – least of all the lead character.

One of the largest draws to John Baird’s first major blockbuster is James McAvoy and his portrayal of Bruce Robertson. He plays a convincingly messed up cocaine addicted alcoholic that the audience is never fully able to engage with. However, this is not to the film’s downfall as what his character lacks in relatable traits he more than makes up for with a strong bravado and dominating alpha male persona; in the later scenes this unstoppable hyper-male attitude even causes a sense of sympathy for him.

Throughout the film many of the characters take the form of different animals in the eyes of Robertson, such as a pig, bird or wicked witch indicating his serious mental issues. These scenes are often surprisingly jumpy and add to the sense of unease in the lead character’s lifestyle. To add to this, one of the funniest and oddest characters is Jim Boradbent’s Dr Rossi, who plays a brilliantly entertaining crazy psychiatrist, appearing often in Robertson’s mind in an Alice in Wonderland type world with oversized bottles of pills and huge creepy smiles.

Filth manages to capture the viewer’s attention throughout, with the help of some truly unnerving scenes and McAvoy’s striking performance. These elements combined create a fantastic, gritty and memorable British film, which will certainly do the novel justice.