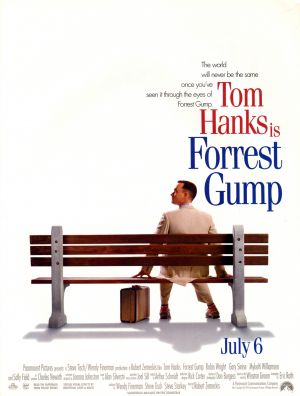 
“Life is like a box of chocolates, you never know what you’re gonna get,” and in some way, so is Forrest Gump.

When Forrest evades his bullies by running with speed across a football field, he unlocks a chain of events that see him as a famous celebrity, a Vietnamese war hero and a multi millionaire, to name but a few moments in his life. But gaining his true love’s affections proves to be a much more difficult task.

The film’s major selling point is it’s continual use of real life events mixed with other awe inspiring moments of the protagonist’s life. His effect on the world is seemingly huge, as he’s said to have single handily inspired Elvis Presley’s dance moves and played a key, but oblivious, role in revealing the Watergate scandal among various other historical moments. They prove to be a fantastic device to keep the audience entertained, and director Robert Zeneckis manages to balance these moments with a sincerity in his characters that doesn’t make it as surreal as it perhaps should be; this is helped especially by making the main character so unaware of there significance. As well as this, these events help register what time setting the film is in as it progresses throughout the decades. The quick pace of these also mean the film effortlessly slides from one event to another, never resting on one long enough to slow the film and even manages to jumble a whole host of typically recognisable genre settings including war, sports and adventure.

Despite the film’s aim to include these fascinating events into one man’s life, the film’s core storyline is Forrest’s love for his childhood friend, Jenny. As far as love stories go, this is an unusual one as Jenny rebels from conservative norms while Forrest lives a more typical ‘American Dream.’ However, the use of Jenny brings an emotional side to Forrest, who most of the time is unengaged emotionally from the people around him. Throughout the film his continuing thoughts are with Jenny, even if she isn’t thinking of him, and this brings an understanding for the audience that is much needed, otherwise his usual being scared or confused could become limiting for the audience to empathise with.

Forrest Gump is an example of fictional biographies done at their best. Combining an elaborate storyline with heartfelt characters and real historical events makes this film an important and entertaining part of modern cinema.