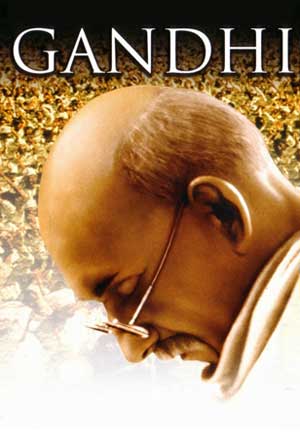 
Does Attenborough’s 1982 movie, Gandhi, do the pacifistic leader of the Indian uprising justice?

Gandhi is a biopic focusing on Mahatma Gandhi’s pursuit of Indian independence from the British Empire and his personal transformation from a humble lawyer to the leader of that Indian revolution, all through non-violent means.

The makeup and effects crews transformed 38 year old Ben Kingsley into the 24 year old Mahatma Gandhi for the opening scenes and are truly the unsung heroes of the film. Throughout they manage to create a convincing Indian appearance from a Caucasian man, a feat that is helped by Kingsley’s superb performance.

Kingsley’s ability to step into the shoes of Gandhi so effectively is testament to his capability as an actor and his understanding of the role; at no point does he allow the audience to disengage with Gandhi’s charm. As the role becomes more prophetic and wise, so does his acting, creating some very touching moments during Gandhi’s fasting. This is most present at points of imminent death developing a great on-screen relationship with his supporting cast who beg for him to eat.
Director, Richard Attenborough, manages to capture the sentiment of a figure so well recognised with many of the scenes touching the viewer emotionally. An example of this is the scene where a British general orders the massacre of over fifteen hundred men, women and children. Throughout, Attenborough does well to translate the situation, often depending on character interaction to convey Gandhi’s status and his importance in history.

This biopic is a well constructed, touching and informative tribute to the leader of the Indian revolts with a great cast and director. As the lead, Ben Kingsley delivers a convincing and accurate portrayal of Mahatma Gandhi, and deserves the many plaudits he received for the role.