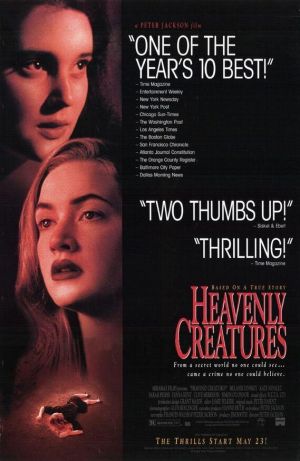 
Two girls get lost in their imagination but will you get lost with them?

In 1952 Pauline Parker, a lonely girl who keeps disappearing into her imagination, meets a like minded teenager, Juliet Hulme, and together they create the Land of Borovnia in which they live out their dreams. But when Juliet is told she is leaving for South Africa, Pauline must find a way to go with her, no matter what it takes.

Playing with how different people see reality, director Peter Jackson makes the world appear a reflection of the two leads emotions. It is through the use of colour that he starts to differentiate the real and imaginary worlds, with the imaginary world being saturated in colour while the real word looks grey and depressing. However as the film progresses the look of these worlds gradually merge and become almost unrecognisable from each other; this helps show Pauline and Juliet’s slide into madness and move away from reality. The most stunning visual moment is the first visit to the castle in Borovnia, where the clay animated characters are introduced and brought to life; this shows off the design and prosthetics teams’ craftsmanship and the skilled framing of Jackson’s directing to make it so beautiful.

Melanie Lynskey and Kate Winslet, both give standout performances as Pauline and Juliet, but it is together when their twisted infatuation grows that the film really comes to life. Playing Pauline, Lynskey manages to maintain an insular character by suppressing emotions while still connecting with the audience. She does this through the use of micro expressions while in close up and it is these that make her performance exceptional for such a young actress. However when with Juliet, Lynskey alters her performance to become uncontrollably happy which is an impressive switch reminiscent of Peter Jackson’s later infamous character, Smeagol, from the Lord of the Rings franchise.

Even with a lead performance that strong, Winslet manages to outshine Lynskey and get the plaudits, even winning an award for Best British Actress at the Empire Awards. Her characters extroverted personality showcases a Winslet that is more outlandish and disturbing than most of her performances of recent years.

This film captures the essence of what is meant by a hidden gem, and with stellar performances and wonderful direction this is a film that deserves more recognition than it has garnered.