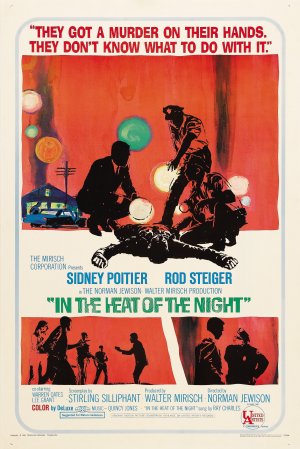 
How hot can this racism tackling, Best Picture winning, murder mystery be?

After local police accuse him of murder solely based on the colour of his skin, Virgil Tibbs, an African American homicide detective, is forced to discover the truth even if that means endangering his own life and angering the small town.

Much like Guess Who’s Coming To Dinner which was released later the same year, Sidney Poitier is portrayed as an intelligent, successful professional. In this film Poitier plays a composed detective who uses silence and articulated speech to ruffle feathers and get what he wants. Constant racist remarks towards Tibbs force an almost constant brooding anger that is never truly exposed enabling Poitier to brilliantly restrain this emotion in his glare when in conversation.

Most of the film is fairly sedate with only a few scenes highlighting the true extent of the racism in Mississippi. One of these scenes comes when Tibbs is chased and trapped in a warehouse with four angry men where he is forced to swing a pole in a fight for his life against the young men who all grab chains, poles and other instruments. This a horrific scene that really gets the viewer involved due to the harshness of metals on concrete, yelling and the long-length of the scene.

Despite Poitier playing the main character, it was Rod Steiger who won the award for Best Actor in a Leading Role at the Oscars in 1968 for his portrayal of the bullying, hot headed Sheriff, Gillespie. Steiger’s performance is the opposite of Poitier’s, with him mostly shouting, puffing and grunting through the film, but this contrast makes the film, with their major personality clashing and great on screen relationship taking different turns. Steiger gives a noteworthy portrayal in the film, but Poitier deserved a nomination at least for a scene stealing performance at every moment.

The entire police department change their perspective of Tibbs throughout: throwing him in jail, trying to get rid of him, saving his life and standing up for him all being part of the mix. This transition isn’t done quickly nor is it done with a lighthearted tone, instead the characters begrudgingly give him respect due to his position as a high ranking officer and then angrily because they accept he is very capable at his job. This change of opinion of Tibbs is one of the major strengths of the film and its underplayed nature and reluctant characters are a major achievement.

In the Heat of the Night is a superb film about racism, murder and old fashioned detective work and with Sidney Poitier heading the cast it does so with class.