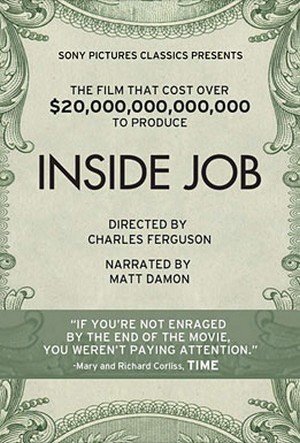 
The global financial crisis of 2008 and subsequent fallout has been covered by the media’s hyperbole to no end. Can Inside Job, a documentary made in 2010, offer anything new?

Following the journey to and from the economic disaster in 2007, this documentary takes an objective look at the reasons it occurred with interviews from witnesses and those responsible.

Matt Damon narrates through the causes of the crisis in educational steps creating a platform for the viewer to understand complex financial systems without significantly ‘dumbing’ them down: an approach refreshingly needed. It’s also written and directed by Charles Ferguson, a political scientist, White House consultant, software company founder and self made millionaire; it’s safe to say Ferguson is qualified for this task.

The film tackles the crisis and its lead-up using five segments: How We Got Here, The Bubble 2001-07, The Crisis, Accountability and Where We Are Now. These segments and a linear narrative both guide the viewer through the growing problems and although the film is heavily biased against the bankers, should we really be surprised? Interestingly however, we see all mentioned presidents, whether Republican or Democrat, being criticised indicating the bias is purely based on fact and not political subjectivity.

Inside Job relies heavily on interviews with financial consultants and bankers but unlike other interviewers this man doesn’t let anyone fib their way out of a question. A lot of squirming and heated interaction takes place once an interviewee realises they are being held partly accountable – each time a beautiful moment.

As documentaries go this is outstanding. It breaks down the complex dynamics of banking, and bankers jargon, and focuses on what happened, using clear facts and an objective insight. This is highly recommended for anyone who would like an educational crash course on the subject.