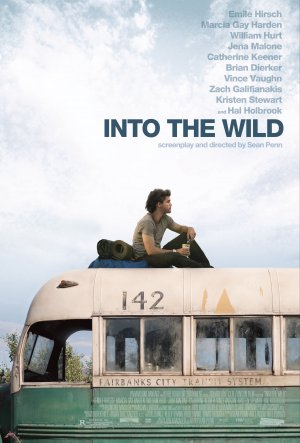 
Backpacking, skinning animals and enjoying life is what Supertramp does best

A young man, self named Alexander Supertramp, goes on a journey of self discovery with the eventual aim to be self sufficient in the mountains of Alaska. On the way he makes friends from all walks of life and risks his own to seek own isolation away from the world.

The film’s core subject matter is Supertramp’s spiritual journey and this is dealt with brilliantly by jumping back and forth in time. His graduation from college sees him recklessly jump onto the stage while later in the film a wiser, more reserved man becomes evident. And it’s the little things that make his change what they really are; his victorious and long awaited killing of a moose is quickly summed up as, “One of the greatest tragedies of my life,” after maggots infect the carcass and it becomes a waste. A small teardrop is seen to run down his cheek and highlights the small scale of his private journey and the privileged and intimate access allowed as a viewer watching him. It is this intimate access that makes Into the Wild so profound; no matter how small the action, the main character feels everything leaving the viewer to openly interpret his emotions.

However, Into The Wild goes one further and adds a complex and often ambiguous set of actions and conversations that end up very open for interpretation. A moment when talking about God sees the sun shine down on him and a friend and this is left to the audience to take seriously or not resulting in a rewarding experience for the viewer to analyse and build on themselves. Supertramps’ own relationship with his parents is the biggest ambivalent aspect of the film as he seems to be angry and rebellious against them first and foremost with this acting as his main driving force. “Where’s your family,” “Don’t have one anymore.” As a viewer it would be easy to see that this isn’t necessarily a healthy basis for a journey of discovery, especially for a character we are meant to root for, but this layer of character depth makes the protagonist and his journey far more interesting and unique than most.

Sean Penn’s direction is reminiscent of Terrence Malick more recent films with the use of a handheld camera throughout to create impressive realism even in the most dramatic of moments while building slow quiet scenes with ultra close-ups of skin, fabrics, objects and nature to bring the viewer closer to the action. This is all interlinked with a soundtrack primarily from Eddie Vedder, who brings folk rock to the film with both energetic and tranquil songs to fit individual scenes and absorb the viewer further into the film.

Into The Wild offers beautiful imagery and accompanying music and an honesty in its characters that may well take your breath away. Attention to detail with character flaws, kindness and weaknesses are what make it stand out from most adventure films.

Would you agree with us or do you think we're talking a load of old todge? Let us know in the comments below!