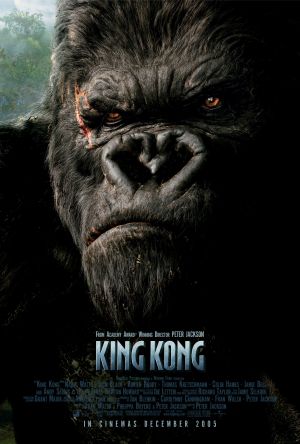 
With more chest thumping, kidnapping and neck snapping in the remake, does this 2005 version of King Kong bring anything new to the famous story?

In 1933, enthusiastic movie producer, Carl Denham, convinces actors, a group of sailors and his movie crew to go on a filming voyage to the mysterious Skull Island. As the star of Denham’s film, Ann Darrow, gets kidnapped and becomes involved in an unlikely love story.

Jack Black’s Carl Denham is perhaps the most interesting character with his unwavering desire to make a great feature length at any costs. It’s this drive that portrays him as the film’s good-guy protagonist trying to follow his passion for filmmaking, which also develops him into a villainous role later in the film. This transformation is great to watch and is outlined by the other characters: he’s solely focused on his film project, while the others realise the grave danger they are in. “That’s the thing you come to learn about Carl, his undying ability to destroy the things he loves.”

Despite being touted as both action packed and romantic, King Kong certainly has its scary moments; these are outlined with slow motion and distorted effects and combined with the island’s natives, huge insects and dinosaurs, the film is far from light-hearted, adding more depth and interest to pad out the island’s fear factor.

Peter Jackson implements the same large scale fights and tense music as he did in his previous work on The Lord of the Rings franchise to create a gritty and realistic portrayal of a fantasy world. Even though King Kong is set in an accurate 1933 New York at the beginning, Skull Island and Kong himself are both far from reality. With Denham filming throughout a large part of the film it even often feels like an epic documentary, or at least until a dinosaur stampede or seven-foot scorpions show up to snap the viewer back to reality.

King Kong is a real treat and seems to have everything: complicated romance, awesome fight scenes and some really scary moments. It's these aspects that make this remake stand out and has become another top draw film from Peter Jackson.