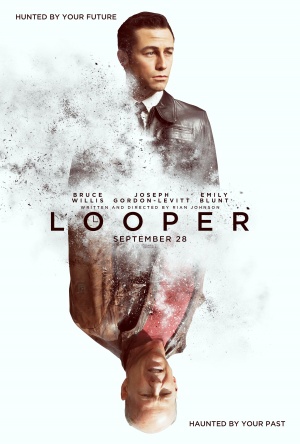 
Can Looper do itself justice or will it want to travel back in time to re-write history?

In 2044, assassin, Joe, is contracted to dispose of people sent back from 2074. When he has to kill his older self from thirty years in the future, he’s faced with a life expiry date and some tough decisions.

The thirty years that separate the two characters change Joe’s outlook on life and with this, his characteristics. Where the younger Joe is more rash, older Joe is more knowledgeable and wise which is a new and welcome role for Bruce Willis; however it’s not all niceties for Willis version of Joe as it’s not long until he begins to hunt down children with some brutal scenes. These moments are not forced or out of place, but always feel a little uncomfortable to watch. While this clearly takes its toll on Willis, with moments of him crying at something so obviously barbaric, he never becomes relatable to the audience due to his dedication on completing his deadly task.

Gordon-Levitt plays a character with very different priorities to Willis’ Joe and with a tougher exterior, he never let’s his guard down or loses his cool. Despite these character traits, it unfortunately means he’s never fully able to let the viewer into his world, but still offers a more substantial emotional connection to older Joe. Mid-way through the film the roles seem to switch with the younger Joe looking out for a woman and her child but neither character is ever engageable enough despite younger Joe’s family interaction with Sara and her son, Cid.

Mixing time-travel and killers is a great idea, but The Terminator franchise did it long before; luckily Looper brings a new angle with criminals and mobsters using time travel for criminal activity and financial gain. This is a great set up and results in neither of the Joes ever becoming a conventional lead protagonist. However, the film never feels stricken from this with enough action and interesting futuristic concepts to retain interest throughout.

With a gritty underworld, the use of new and entertaining technology, time-travel, great characters and deadly assassins the film is unstoppably entertaining.