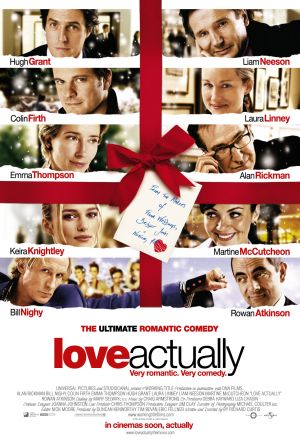 
What does Love Actually do so well to make it one of the best of Rom-Coms?

In the run up to Christmas, families, friends and partners all get ready for the festive season; an old timer rock star, a prime minister in love and a guy who just wants to get laid are just a fraction of the characters making up the film, but it’s the difficult decisions they make, that put their merry Christmas’ at risk.

One of the most impressive features of Love Actually is the huge wealth of acting ability on show. Alan Rickman’s Harry and Emma Thompson’s Karen are one of the standout couples, with the husband and wife offering a slightly different and more negative view on love with husband Harry’s infatuation with his secretary. Other top performers are Andrew Lincoln’s Mark, and Hugh Grant’s Prime Minister, all bringing a wonderfully different direction and romantic angle to the film; this is a particularly impressive feat considering the time allocated to each story. Along with the rest of the sublime unnamed stars, they accumulate to create a fantastic British cast to rival the very best of worldwide film.

Creating a romantic film while maintaining a funny and light-hearted outlook on love can sometimes be difficult, but this achieved by using the multiple story lines and intertwining character arcs, allowing these elements to take the focus. Transitions between stories are sublime, sometimes using music sources to link the scenes or other members of the family i.e. a radio playing the same song that someone is playing live, or the main character’s children attending the same school. These create smooth flowing and seamless scenes and keep the film ticking over, which is fantastic for a film with so many varied storylines.

Alongside the romantic aspects are some truly funny moments that are easily laugh out loud. As a personal favourite, Billy Mack’s ‘Thank you, Ant or Dec’ is absolutely hilarious, and it’s moments like this that make up the film, counterbalancing the more soppy moments. Other moments include the Prime Minister dancing to the Pointer Sisters’ Jump or the subtlety of a Wedding DJ wearing a Motorhead t-shirt. All these add up to make a genuine laugh out loud film, triumphing in creating a Rom-Com that’s very romantic and very funny.

It's rare that a film leaves you feeling as cheerful as Love Actually manages to. This is certainly one of the very best in the Rom-Com genre, and is sure to stand the test of time for decades to come.