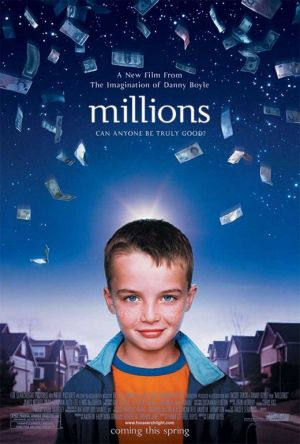 
A bag of cash and the appearance of saints, what more could the Metropolitan Borough of Widnes need?

Following the death of his mother, a young boy, Damian, moves into a new house with his brother and father where he creates a secret hideout near the train tracks. When a large bag of cash crashes through and destroys his hideout, he sees it as a gift from god and decides to use the money for good but he doesn’t have long to spend the money before the country changes to the Euro.

Writer Frank Cottrell Boyce shaped the brothers interactions so that they play out like the internal struggle of one single person and the two brothers take on very different stances on the way to get rid of the money. Anthony, the impulsive older brother, makes selfish decisions like buying the latest gadgets, whereas the younger more idealistic brother wants to get rid of the money by helping people; he takes a group of homeless people for a feast and even drops £1000 into a charity bucket. This is a clever separation and echoes the two extremes of what many people might do in this unusual situation.

At the centre of the piece is an excellent performance from Alex Etel as Damian who, especially for such a young actor, cleverly draws attention away from skilled actors like James Nesbitt and Alun Armstrong in various scenes. Director Danny Boyle helps the audience associate with Damien further by framing scenes to capture his youth and innocence. The scene in which this is shown best is his talk with Armstrong’s St Peter about what actually happened at the feeding of the 5000; his comfortable bedroom space aptly fits the simplicity of his performance and small-scale life of his character. Supporting Etel onscreen is James Nesbitt as Damian’s father; his sometimes-outlandish charisma is toned down so he can support Etel in his paternal role with this allowing Etel to control the pace of scenes.

With visually interesting direction by Danny Boyle, and a great performance by, young actor, Alex Etel, this is a British drama that’s replaced Boyle’s usual grubbiness by something a bit different: hope and faith.