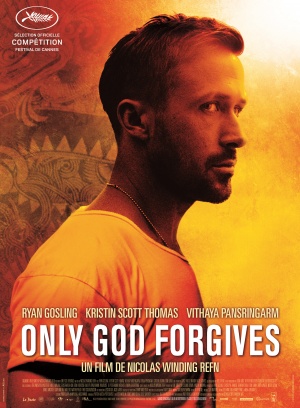 
Ryan Gosling & Nicolas Winding Refn team up again for more uber-violent, art-house action. But does it prove a winning formula a second time around?

Julian and his older brother Billy, two American expatriates living off the criminal underworld that thrives in Bangkok, run a Muay Thai boxing club as a front for a drug operation. But when Billy is murdered in vengeance for raping and killing a young prostitute, Julian is dragged through an ever-escalating set of violent circumstances.

After bursting onto the scene with Pusher, Bronson and then Valhalla Rising, Danish born director Refn tore onto everyone’s best of 2011 lists with Drive, a heavily stylised albeit slow burning L.A crime thriller. Well its true Only God Forgives shares a few direct genes with its predecessor, it’s main star for one. But where as Drive wore it’s influences of early Michael Mann and William Friedkin on it’s sleeve, this picture see’s Refn take advantage of his newfound creative freedom and sees us firmly back in art-house territory.

Stylistically Refn imbues the entire affair with a chilling sense of dread and menace. Larry Smith’s cinematography is stunning to behold, capturing Thailand’s seedy underbelly but also its beauty; which means it’s never quite as boring to look at as one might imagine from the pacing issues. Whatever your final opinion of the film, something that cannot be denied is that Refn and Gosling have certainly run with their vision, and it most certainly will draw a strong reaction from it’s audience, good or bad. A goal they both surely aimed for.

Gosling’s performance as the quiet and emotionless Julian is his Drive character turned up to eleven, barely mumbling a word, he bubbles under the surface that suitably serves the story well. One wonders if Gosling is aiming for the kind of monosyllabic performances Steve McQueen used to deliver so well.

Kristin Scott Thomas on the other hand is almost unrecognisable as Julian’s bleach blonde, chain-smoking, foul-mouthed mother. Flying to Bangkok to make certain her son is avenged, she harbours a chilling resentment towards her youngest son for reasons we discover as the film unfolds. Truth be told, it is their odd Oedipal relationship and Vithaya Pansrigarm’s performance as the death-dealing Chang, and not the plot as a whole, that really sticks in the mind long after the running time is through. Cutting a bloody swathe through the film’s proceedings, it is Chang’s unassuming demeanour, and penchant for post murder Karaoke, that will either terrify you or mystify. Refn’s script comes laden with slow, lingering moments without a sympathetic character on show. This initially shouldn’t be an issue, plenty of classics have come with despicable leads, however there is a crossroads within the film where it seems one must either buy in or tune out to the pseudo fairy-tale that Refn presents (that really plays like a psycho analyst’s wet dream).

Truly a divisive film if ever there was one. However you view it, it’s either the un-commercial action film you’ve always been waiting for, or the most long-winded. Worth a watch for fans of Refn or Asian cinema, however those expecting a sequel to Drive might come away disappointed.

What was your impression of Only God Forgives? Enthralled, mystified or frustrated? Let us know in the comments below