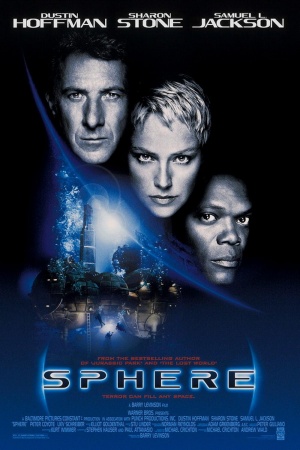 
How does an underrated sci-fi fare when set at the bottom of the ocean rather than with laser guns or foil clothes?

When a spaceship from several hundred years ago is discovered at the bottom of the ocean, a team of scientists plunge down to examine the mysterious craft. What they find inside the ship baffles the group, especially when a sphere seems to start controlling members of their group.

Using fantasy creatures, like unseen ginormous jellyfish and its eggs, combined with the unknown aura of the spaceship, allows this categorical sci-fi to explore other elements and sometimes turns it into a thriller that’s not unlike Alien. And with one mysterious entity causing conflict between the characters in a place of no escape, light-hearted this certainly is not. These moments are some of the best in the film and capitalise on the underwater claustrophobic setting.

Each of the five main characters bring something different to the situation, adding his or her expertise to the dismay of some of the others. Doctors Goodman and Halperin, played by Dustin Hoffman and Sharon Stone, offer an intriguing romantic link, while Samuel L. Jackson plays a great villainous good guy who appears to be under the spell of the entity. He continuously ignores the deadly situation facing them, throwing a creepy, distant, and unstable element to the mix. This blend of characters always maintains excitement, with their conflict ultimately being their downfall.

One of the absolute standout features of Sphere is its unrelenting ability to keep you thinking and second-guessing your opinion on the characters and situations. At some points it tries to present a possible outcome, only to throw in another element to challenge the characters’ perceptions and the mysterious psychological effect of the sphere. Without giving too much away, it certainly keeps you discussing and thinking about it way after the credits.

In an enticing mix of thrilling scenes, big name stars and an aura surrounding the spaceship and its contents, it's a real surprise that this managed to flop so badly at the box office to remain a fairly unknown hidden gem.

Have you seen Sphere or did it slip under your radar too? Who was your favourite character? Dive right into the comments and let us know.