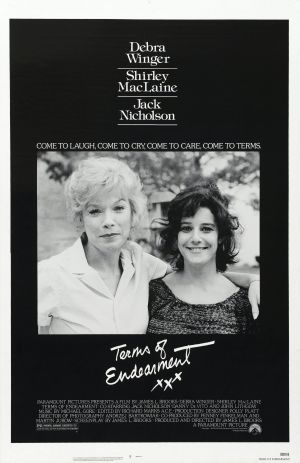 
For a film that won five Oscars in 1984, is Terms of Endearment worth watching for audiences who missed it the first time round?

Terms of Endearment is the story of a mother and daughter over thirty years. Despite the mother being stubbornly dependant on her daughter, they rarely agree on anything, but keep in contact via phone almost every day. Money problems, adultery and meeting an astronaut are just some of the highlights of a film that exploits drama, comedy and romance.

The film’s unique asset is its odd use of character; Aurora, played excellently by Shirley MacLaine, is a mother who can’t engage emotionally with her daughter but instead nags her and is utterly dependant. This mother-daughter dynamic is displayed early on with a few quick scenes such as when Aurora walks into her young daughter’s bedroom late at night because she can’t sleep. The daughter invites her in and wraps her arms around her. This continues throughout with Aurora being shown as a stubborn, selfish and dependent mother who provides a great deal of light-hearted comedy opposite other frustrated and troubled characters, not least her daughter.

The film steps up a notch when Jack Nicholson’s fun-loving, drunk, Gary, becomes involved in Aurora’s life as she is forced to make an emotional contact. They are exact opposites but are fantastic as a comedy duo seen best when Gary does donuts in a sports car using only his feet while Aurora clings on for dear life. Nicholson is superb in this role and brings a rebellious charm to the character that we’ve seen him do so many times before.

In 1984 Terms of Endearment won Oscars for Best Picture, Best Director, Best Lead Actress, Best Supporting Actor and Best Adapted Screenplay and it stands the test of time remarkably. Despite the film being a straight-forward family story, its epic thirty year journey packs in a tremendous amount of comedy, drama and emotion all in equal measure.