Recommended Films >> Person of the Month >> Person Films >> The Beach 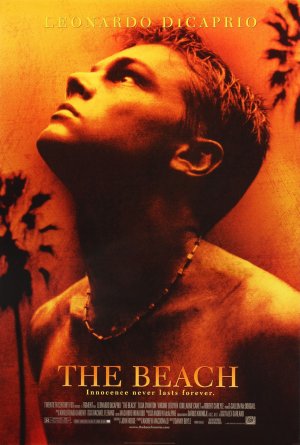 
A paradise island and a self-sufficient colony with enough marijuana to last for years, what could possibly go wrong?

American backpacker Richard searches for a less popular side to his travels from and finds it when left a map to a secret island. He decides to follow the map and finds what looks like paradise.

After a successful adaptation with Trainspotting, Danny Boyle once again tries his hand at adapting a novel but unfortunately this time with less success. The Beach is visually a mismatch of different styles with dream/hallucination states and even an attempt at replicating video games; this mismatch results in the film feeling quite segmented.

However this segmentation is given stability by the soft tones of Leonardo DiCaprio’s narration. It brings a constant and reassuring element throughout the film but is even more effective when he is expressing danger leaving the audience with an uncomfortable impression far more effective than the scenes alone. DiCaprio adapts Richard to fit this reassuring style with confidence and his performance is one of the main reasons to watch the film.

Tilda Swinton plays Sal, the leader of the paradise colony; she rules with total control using a powerful kindness that brings out her trusting side as well as using her sexuality to control Richard and the other males. Her strong performance as a Boudica type leader, as well as being trustworthy, also brings a sense of unease in the way she, just like the others, will do all manner of vile things to keep the settlement a paradise.

With some out of place surreal aspects that counteract the film’s cinematic beauty, The Beach will never be a universally loved film however those are the things that make it a memorable cult favourite.