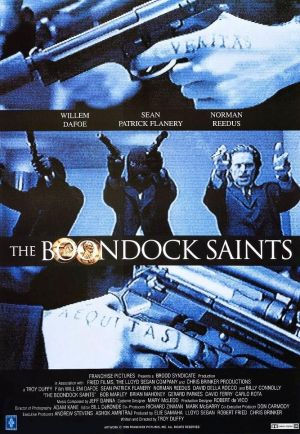 
We’ve seen vigilante’s going after bad guys before but can a religious element and the Irish make this stand out?

When the MacManus brothers kill two gangsters to protect themselves they decide to carry on their killing spree by cleaning up Boston’s underworld. But with a smart FBI Agent on their tail it doesn’t take long until they risk prosecution or death.

Sean Patrick Flanery and Norman Reedus do well to bring the wise cracking duo to life despite a fairly generic basis to start from. They’re Irish, they like to drink, they’re religious and they suddenly decide to kill people. There isn’t some big realisation but this isn’t a hard hitting drama either. Flanery and Reedus are excellent at making the brothers likeable despite their brutal yet entertaining attacks, such as setting a man’s backside on fire and later dropping a toilet from the top of a building onto his head. But all characters fall under the bracket of being simple and unrealistic with the lesser actors struggling to find a convincing way to disguise awkward lines. A bar owner character suffers more than most as he is unable to fool the viewer into believing he has tourettes. Repeated shouts of swear words also appear rather dull and the desired humour falls way short of the mark.

The films execution is also extremely naff with continual fade-in and fade-outs being used between scenes that result in aging the film considerably. Director and writer, Troy Duffy, also includes several lightning quick scenes to push small bites of information, but these still use this slow transition and immediately take the viewer out of the action.

Willem Defoe is shown with the same disappointing execution when he’s introduced in slow motion, with electric guitars making him seem important and dangerous. Troy Duffy uses painstakingly unique scenes, like him listening to classical music while looking over a crime scene. But the pain comes from the viewer, as these scenes are so consciously written to be admired that they cause the film to appear more light hearted and naff than is passable. Having said that Defoe himself shines through as a hard-nosed FBI Agent, Paul Smecker, who repeatedly spouts theories at crime scenes and annoys his junior officers. His charisma comes across throughout and he even pulls off some of the more outlandish Duffy character segments such as doing an Irish jig at a murder scene and dressing up as a woman to enter a mobsters house.

The Boondock Saints has a simple premise, is poorly executed and doesn’t stand out from other films of its nature. Fortunately it’s helped by the charisma of its lead actors but with so many faults it’s nothing too special.

What do you think is missing from The Boondock Saints or shouldn’t we take it too seriously? What’s your favourite vigilante film of all time? Let us know in the comments below