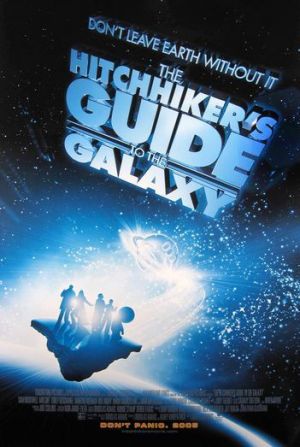 The Hitchhikers Guide to the Galaxy (2005)


“It’s an important and popular fact that things are not always what they seem.” But is everything as it seems in this geeky romp through space?

When you think of what this film went through, you will be surprised it ever got made at all. After the death of Douglas Adams, the creator of the radio series, the book based on the radio series and the television programme based on the book, and with a movie script just half written you would expect the film to be just another pipe dream, but it wasn’t.

The choice of rookie director, Garth Jennings, is a brave move that really pays off. Jennings is a real fan of the source material and brings the story to life in a way that will please newcomers and aficionados alike. The visualisation of the guide entries with its bold colours help the newcomers become emerged in the film and the casting of Simon Jones, the original Arthur Dent, as the recorded message is a little nod to the past.

To help keep a sense of normality to this crazy universe an everyman was needed to play the last human, Arthur Dent. Luckily they cast possibly the only actor who could play it right, Martin Freeman. After roles in ‘The Office’ and ‘Love Actually’ this was his breakout role; his performance is subtle and understated while surrounded by the unusual supporting cast.

The design work in this film brings a sense of real life to the caper. Marvin, the paranoid android, has had a complete design change from his television series original boxy-metallic look to a sleek, white robot that looks part of the Heart of Gold. The original Marvin can be seen in the queue in the office block on Vogsphere.

The strongest design comes in the form of the Vogons who instead of being CG characters were good old fashioned men in costumes. In a Hollywood blockbuster this would look out of place and wouldn’t be believable however they fit perfectly in this great British movie.

With aliens, robots and towels this strange film is a joy from start to finish and should be watched by all who come by it.