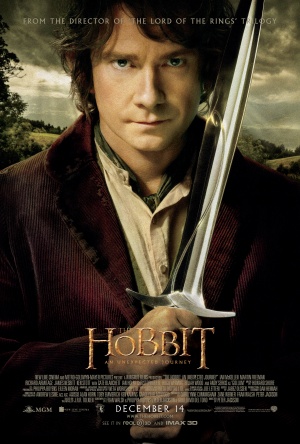 The Hobbit: An Unexpected Journey (2012)


After the success of The Lord of the Rings franchise, can Peter Jackson make a success of the prequels?

Years after his grandfather Thror was deposed from his throne by the dragon Smaug, the dwarf prince Thorin Oakensheild sets off on a mission to reclaim his throne of Erebor as well as his home. Along with 12 of his kin and Gandalf the Grey, they employ Bilbo Baggins as their burglar, even if he’s slightly wary of leaving his cosy life in his hobbit hole.

Learning from his previous work on fantasy films, Jackson uses a prologue during the opening scenes to introduce the books sizeable backstory and also begins some character development for a handful of the thirteen dwarves. This is an essential way to keep the audience up to speed on such an immersive and complex story arc and is done so with excitement and quick pace to keep up the entertainment. The world of the dwarfs has even been expanded during the prologue meaning that The Lord of the Rings’ single dwarf and the visited dead realm are placed in the context of an entire civilization.

Jackson manages to balance the childish nature of the book with the same mature storytelling seen in his previous adaptations by using songs to bring the culture of the dwarves to life. Cleverly the songs never allow the dwarfs to appear weak due to the aggression and sadness in the songs resulting in soulful warriors that all have a tragic story to tell.

Taking the lead as a younger Bilbo Baggins is Brit actor Martin Freeman, who comes with the experience of combining visual comedy with a sense of normality. This is used to great effect making this version of Bilbo not only more likeable than Ian Holm’s older Bilbo but even more engaging than The Lord of the Rings lead, Frodo Baggins. Admittedly this is all partly due to Bilbo having more of a freeform role in the story, whereas Frodo had a singular mission with little company. However having this stronger lead means that the film becomes more about his own journey with other characters enjoying a lot less screen time than The Lord of the Rings allowed.

With enough action to counter balance the required explanatory segments, The Hobbit: An Unexpected Journey is certainly enjoyable and leaves room for the franchise to expand its scope.