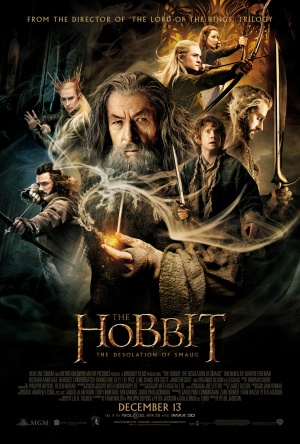 
Is a fire breathing dragon enough of an addition to keep interest in a hobbit, a wizard and a group of dwarves?

Continuing their journey, the company must pass through the Woodland Realm, home of the Wood Elves, and Laketown, a dangerous and corrupt city of men before they get to the mountain, Erebor. As their designated burglar, it’s up to Bilbo Baggins to steal the jewel, the Arkenstone, from the mountain’s single occupier, the dragon Smaug.

The Hobbit franchise is continued with fast paced scenes that are brought to life with action that is kept lighthearted, even when decapitations and serious injuries are on the cards. This is done by creating a huge amount of unrealistic movement around the characters, with them jumping, sliding and bouncing off objects in a way that can’t be taken too seriously. One of the most superb action scenes in the film is the group’s river getaway in barrels. They speedily throw weapons to each other, tumble in and out of the river uncontrollably and attack with enough skill and calamity to create a huge amount of enjoyment.

The addition of the title character Smaug, a fire breathing, gold loving dragon, adds a new major villain to the franchise and finally gives the heroes a formidable opponent after reasonably easy conflicts in the previous film. Benedict Cumberbatch voices Smaug and adds a devilish and gentlemanly voice to the character that fits perfectly. Unlike the other Middle Earth set franchise’s famous CGI character, Smeagol, Smaug’s emotion is portrayed mostly through his low and threatening voice and becomes a little unnerving as he starts conversations teasing information out of characters.

The story itself expands during this film and introduces a separate quest of discovery for Gandalf that links nicely in with the existing Lord of the Rings franchise. His story is linked to the main narrative through similar conversations between both and avoids becoming an annoying interlude by adding a mysterious unknown element to what he is trying to discover. When Gandalf finally discovers this truth he gets to show his powerful skills as a wizard and with this comes Peter Jackson’s remarkably stunning visuals of a mesmerising battle with orbs of light shielding and attacking combatting foes.

The Desolation of Smaug manages to build on its lighthearted and well humoured predecessor while adding more impressive action scenes. The story's scope is also expanded with new characters and plotlines coming into play resulting in a draw dropping visual feast that keeps interest from start to finish.