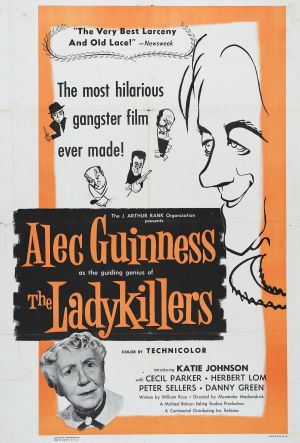 
Once voted as one of the best fifty comedies of all time, is the last of the great Ealing Comedies worthy?

Eccentric old widow Mrs. Wilberforce lives alone with her parrots in her lopsided house until she is approached by the sinister Professor Marcus who is after a room to rent. Thinking that he and his group of friends are an amateur string quintet looking for some rehearsal space, she agrees, but when she finds out they have just pulled off a heist, they decide there is only one course of action: kill Mrs. Wilberforce.

A group of five criminals against an old lady doesn’t appear like the ingredients to your conventional comedy, however director Alexander Mackendrick balances the sinister with the slapstick and creates a piece that has really stood the test of time.

Alec Guiness plays Professor Marcus, the leader of the renegade bunch, with a truly sinister edge which is only softened by his ill-fitting false teeth that give him a slight comedic edge. He manages to take the lead in the film without overshadowing any of his co-stars. In the scenes with him and Mrs. Wilberforce he never allows himself to completely take control of the scene which means the audience can connect to both of them.

Focusing the story post heist allows the film to reflect the true personalities of the supporting cast to a greater extent. Claude, a confidence trickster who doesn’t have any confidence, Harry, a wheeler dealer who cares, Louis, a cold hearted foreign gangster with an unusual fear and One-Round, an ex-boxer with a soft heart. Having a gang which all have a well thought out character arc results in a realism which is much needed to counteract the slapstick elements.

The Ladykillers shows just how good the British film industry can be as well as what it can do far better than the American film industry; a truly brilliant black comedy.