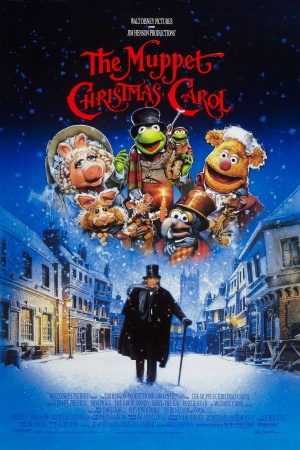 
What can The Muppets bring to refresh this classic tale?

Gonzo the Great, or Charles Dickens as he wants to be called, tells the story of Ebenezer Scrooge and his visitation from the ghosts of his dead colleagues as well as three Christmas spirits.

Moving from films about The Muppets themselves to the retelling of a classic novel was a brave step for director Brian Henson. Henson manages to make his version of Charles Dickens’ iconic ghost story one of the most accessible to younger audiences by using existing Muppets characters to tell the well known story. He also continually breaks the fourth wall to liven up the story with one of the more instances being when Sam the Eagle (acting as Scrooge’s teacher) repeatedly slips out of character and has to be corrected. Adding a narration by Gonzo and Rizzo the Rat also helps fans of The Muppets fully embrace the story and even adds a level of slapstick comedy that wouldn’t have worked inside the story itself.

Bringing life to the original scrimper, Ebenezer Scrooge, is British legend Michael Caine, who adds his naturalistic and direct approach to performance as a counter to the fact he is acting against frogs, bears and pigs. The scene where he meets the Ghost of Christmas Yet to Come shows off Caine’s approach best. Even though he’s playing against a faceless mute, the emotion and honesty he brings to the scene is impressive, especially when considering he is one of a few humans surrounded by Muppets.

Successfully casting The Muppets into their Dickensian roles is one of the most impressive aspects of the film, allowing each to portray the novel’s original characters as accurately as possible while still maintaining the Muppets’ personalities and natural energy. The roles were well selected with Kermit playing Bob Crachet, the emotional heart of the story much like Kermit is in the TV series, and Fozzie Bear taking the role of Mr Fozziwig. This seems like a surprisingly small roll given to his usual central Muppet status however this proves to be a clever move as the character of Mr Fozziwig best fits his relaxed and joyous nature. The standout casting however is the slight tweak of the grumpy and tortured Jacob Marley into the perfectly suited Statler and Wardolf. These two have always been grumpy and pained so having them scare Caine’s Scrooge is an ideal fit and with the addition of a second ghost, more of a fluid conversation entertains rather than a very one sided dialogue.

An exquisite blend of a wonderful story and musical joy, this film has found its place as a must watch in the Christmas period for many of its fans, including us here at FilmAttic.