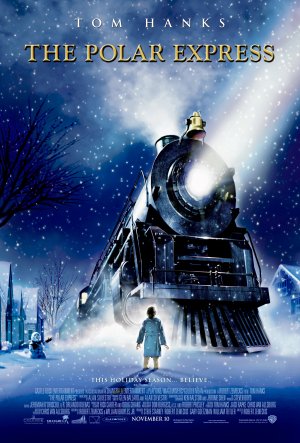 
A film involving a magical train: will you be swept along for the ride?

A boy who doubts the existence of Santa is waiting to hear the sound of reindeer bells to find out if Santa is real or not. To his surprise he hears a train whistle and is taken on a magical journey of discovery with other pyjama-clad children who are all excited as they know they’re heading north.

Working with motion capture allows this animated film to have an edge of realism about it while still remaining its fictional tale. It’s this design decision that makes the characters as human as possible and stops it from being compared too closely with animated big guns like Pixar’s Toy Story and Monsters Inc. This also gives it a chance to impress with its magical and dream-like visuals. Having a steam train rolling through a snow covered land is impressive alone, but having it stop right in the middle of a suburban neighbourhood allows the magical feel to the film integrate more with the real world.

Tom Hanks plays multiple roles and adds to the film’s dream-like feel, as well as creating and becoming a large range of characters that show off his diversity. Hanks plays both the lead characters, the Conductor and Hero Boy, which he brings to life with the same confidence that he has brought to many lead roles in the past but it’s his side characters that make the film so memorable. The characters of Santa Claus and the Hobo both show Hanks’ ability to drastically change his physicality for his roles, which is something he isn’t always noted for.

Having other experienced actors play children roles allows the characters to easily connect with the audience, with even adults being able to appreciate the children’s shared love of Christmas and Santa Claus. Hanks himself does well as Hero Boy, but it is Nona Gaye’s Hero Girl who is the easiest young characters to engage with due to her relative normality and grounding in her situation. The action flows around her and brings out the best in others.

With strong visuals and extremely watchable performances, this is a good Christmas film that is niche enough to last; however, it doesn’t quite gain the achievement of becoming widely thought of as a favourite in the festive season.