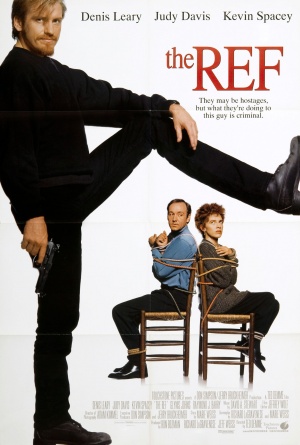 
The Ref contains marriage counselling, blackmail and kidnapping, but how appropriate is this alternative comedy for Christmas?

When the local police begin a manhunt for a burglar, he hides away kidnapping a married couple in the process. What he doesn’t realise is that he’s become part of a marriage gone sour, and with friends and family arriving for Christmas, things couldn’t get much worse.

The Ref is predominately a character-based film and suitably Kevin Spacey is at the fore of the action. Playing a disgruntled husband who argues continually, his performance is very similar to that of Lester Burnham in American Beauty. Spacey steals the show at times with rants at his wife that get his character heated with these moments, meaning the movie has aspects of an impressive drama. Judy Davis plays his wife and works brilliantly as his opposite with both of them aggravating the other to hysterical shouting no matter what the situation. This combined with Denis Leary’s portrayal as burglar, Gus, heightens the drama and brings in a great deal of comedy for the inappropriateness of their conversations. Gus often appears the most helpless despite his gun and position as kidnapper, and it’s this ‘ref’ or marriage counselor position he is forced into that again brings a great deal of comedy out of scenes – especially when he tries to convince various family members of his heritage as Dr Wong: “Well, my mother was Irish.”

This situation gradually builds up to become more wonderfully dramatic, with the slow addition of new characters joining them for a Christmas dinner becoming difficult to balance for Gus and the married couple. The stand out character from this line up is easily Glynis Johns’, who plays the despicable mother-in-law, aggravating everyone she encounters and is a challenge for Gus to stay cool. This sets the family up for some great exchanges and one liners with one of the best coming from Gus: “Your husband ain’t dead, he’s hiding.”

As it stands, the Ref isn’t the perfect Christmas film: it includes bad language, immoral characters and a marriage that is struggling amongst other issues. But it’s inappropriate placement as a Christmas film, with a kidnapped dysfunctional family, make it a brilliant alternative to the usual Christmas movie and a stand out choice.

The Ref revels on being an unorthodox type of Christmas film, going against Christmas cheer, family values and common decency to create something that stands out from the perfect American family.