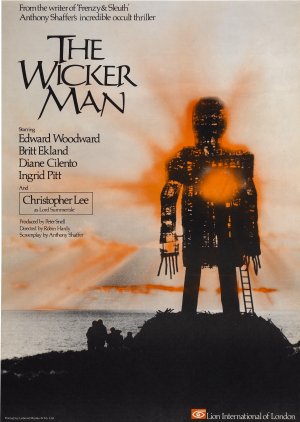 
Christianity and Paganism collide in this horror classic.

Upon receiving a letter about the mysterious disappearance of a young girl, Rowan Morrison, Sergeant Howie goes in search of her. However when he arrives, he find the locals are less than helpful and all seem to be hiding something.

By starting in a church with Sergeant Howie receiving communion, it enhances the difference between himself and the residents of Summerisle who worship the old gods. With modern Britain becoming more secular his actions are viewed as foolish with his anger at their belief that jumping over a fire naked to increase fertility but not noticing that his belief that a wafer becomes the body of Christ is just as strange. This alienates him and makes the pagan villagers more relatable however; originally this wouldn’t have been the case with Britain being more accepting of the Christian tradition and would have been more shocked by the undermining of it by the locals.

Sergeant Howie is played brilliantly by Edward Woodward and it is his difference from usual police officer leads as he does everything by the book which works so well in this difficult environment by counteracting the free and easy islanders. His frustration that everybody, including the child’s mother and the lord of the manor Lord Summerisle, is not telling him the full truth drives him to act out of character leads him to assaulting an innocent member of the public.

The real star of the film however Christopher Lee who plays Lord Summerisle with a friendly dignity that, even though he is not telling the full truth to the law, makes him the most likeable character. In the final scene the power of his voice on top of the wind and the panoramic vista creates a truly memorable moment, even with everything that happens in that scene he manage to draw the attention onto him as he controls the scene beautifully.

With it rural setting and interesting pagan practices The Wicker Man is a true classic and even though not a terrifying horror film it has aspects that will gives a good chill down the back of the neck.