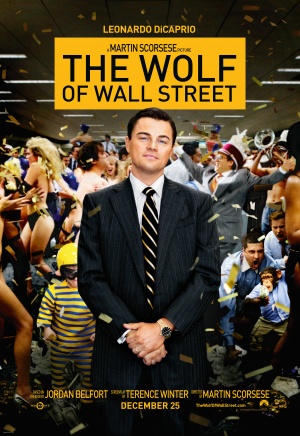 
With an incredible January 2014 line up so far, do Scorsese and DiCaprio pull it out of the bag?

Jordan Belfort, a money, sex and drug driven stockbroker, takes on Wall Street with illegitimate transactions and aggressively dubious sales techniques; it’s only a matter of time until the FBI catch up with him and see through his criminal cover-ups.

With an Oscar nomination for his lead role and playing the drug-fuelled protagonist, Jordan Belfort, DiCaprio shines as the star of the show – and so he should. Acting drunk or high throughout a large part of the film, he convincingly executes Belfort; but is it enough to deserve his much-craved Oscar? The short answer: yes. DiCaprio manages to draw the audience into his world, which is massively helped by his many honest and frank monologues to the camera.

Belfort’s character progression is fun to watch and his interactions with the supporting cast, particularly the “villain” of the film, FBI Agent Denham, is sublime, usually resulting in him walking on the brink of illegalities or showing the bravado that comes with his extraordinary persona. “There’s no nobility in poverty. I’ve been a poor man, and I’ve been a rich man. And I choose rich every time.” Belfort’s relationship with Donnie is exceptional as we see Jonah Hill taking on a character that is vastly different to anything he’s done before, leaving behind his usual dry humoured self for a more confident and cocky sidekick to Belfort. His over the top charisma allows both of the eccentric men to bounce off each other and between them they continuously provide hilarious scenes.

Watching Belfort transform his life from having a humble apartment to having a multi-million dollar estate and supercars is exciting to watch; but the money spending doesn’t stop there. The film is absolutely packed to the brim with cocaine and a variety of pills that create some very funny moments; when Belfort and Donnie take a couple of ‘Lemmon’s’ and massively underestimate the effects, they both end up rolling around with limited use of their legs and voice. It’s these kind of silly or slapstick moments that fit in so well with the overall theme and keep it extremely light-hearted without ever seriously touching on the serious illegalities like fraud, theft or drugs – not to mention the immoral implications.

The time The Wolf of Wall Street takes to develop important characters could easily have made it a slow burner; however, with all the drugs, crime and partying, it never slows down and delivers comedy and drama in equal measure; a top notch outing for DiCaprio and another thoroughly enjoyable masterpiece for Scorsese.