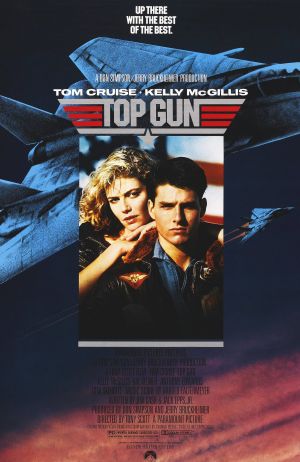 
Men’s oiled bodies, an eighties soundtrack, and gallons of testosterone – what exactly is it that makes Top Gun stand out as an action film to beat?

When a reckless fighter pilot gets the chance to enter a military competition to be the best of the best, he must lose his womanizing, easy living attitude or face endangering his own life and those around him in a struggle to win the ultimate pilot’s prize: to be named Top Gun.

Top Gun is first and foremost made up of alpha male personas and action packed flying sequences. Maverick and Goose provide most of the brilliant and constant banter and with their position as underdogs that don’t play by the rules – it’s easy to root for them against the cool and calculated pilot, Iceman, ‘This is what I call a target rich environment,’ ‘You live your life between your legs, Mav.’

Tom Cruise plays Maverick with an arrogant charm but his co-pilot, Goose, played by Anthony Edwards, steals the show as the only male who isn’t super macho; he knows he’s weaker than the others but his camaraderie and ballsy attitude are relatable to an audience who are mostly not high flying military pilots. This great setup between Maverick and Goose makes them easy to idealise using humour to heighten the macho, egotistical tone of the film with their hilarious chattering and bold moves like hitting on a woman by singing, ‘I’ve got that loving feeling.’

However, this bravado is dampened briefly when Maverick loses his womanizing edge in a steady relationship, combined with a traumatic incident which slows the pace for a while. These inclusions add more depth to an aesthetic-focused film, and although not groundbreaking, they are hugely effective at making the film more memorable than a single purpose action story plot would otherwise have to offer.

The fight sequences are executed with style and excitement with training exercise scenes focusing on cockpit reactions which use dialogue between teammates and rivals to build tension. Scenes that involve real combat step up this excitement with close-quarter flybys and unknown dangers that worried pilots on the verge of death can’t quite foresee. This results in some of the best flight action in the film, and has the character’s quick-witted dialogue and clever direction to thank for this success.

Top Gun is a must see for action fans with it’s blend of competitive bravado, cool styling’s and a convincing attempt at emotional depth.