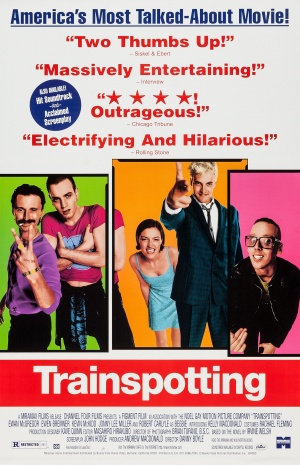 
Does a film work when it mixes realistic stories with surreal hallucinations?

Trainspotting follows the life of Renton and his off-and-on again relationship with heroin. With his friends Spud, Sick Boy, Begbie and Tommy, they tread the line between the legal and illegal sides of life in their activities embroiled in the Edinburgh underworld.

Creating a story with addicts as the leads allows director Danny Boyle to bring a wonderful uniform vision to the film giving the audience an excellent insight into the minds of the characters. He manages this by making every scene feel slightly different, giving the audience a rise and fall to match Renton’s emotional state; along with the well-scripted narration it absorbs the audience and allows a repeated switch between a highly intensified style to low energy, realistic moments.

This was a break out role for Ewan McGregor who had previously been a lead male in Danny Boyle’s Shallow Grave but it was his performance as Renton that got him noticed. By completely embodying the character and bringing a great physicality to the role in both the surreal moments, like the worst toilet in Scotland and cold turkey scenes, as well as the scenes of realism, McGregor turns what could have been an amazingly unlikeable character into an improbable cinematic hero.

With a solid supporting cast Robert Carlyle best manages to adapt his character from the source material to an original and exciting figure to watch. By creating a character that is utterly fearless and even more unforgivingly violent, Carlyle overcame his smaller stature compared to the on-paper version and is even more frightening for it. The scene where he throws a pint glass randomly to start a fight shows how his addiction to violence is more destructive than heroin addiction to the outside world.

In bringing a cult favourite to the screen Danny Boyle created an enduring vision as well as elevating the careers of now worldwide stars Ewan McGregor, Robert Carlyle and Kelly Macdonald.