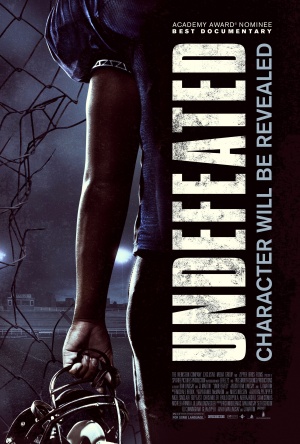 Undefeated follows Bill Courtney, the head coach of Manassas Tigers and a high school American football team from Memphis through a season with their attempt to win a single playoff game, a feat they have never managed in the school’s history. The experiences of the players are shown through the lives of three seniors; O.C. Brown, Montrail “Money” Brown and Chavis Daniels.

Where it rises above other underdog sports films is that, due to it being a documentary, nobody is sure whether they will reach their goal. It is the emotion shown by Courtney and his players that make the film as touching as it is and it shows how small events can change the course of somebody’s life.

The film maker originally planned to make the documentary about O.C. Brown after seeing YouTube footage of him playing; he was being touted by most of the biggest colleges for a scholarship however he was struggling with his grades. They decided to expand the story of this documentary because as well as his story being strong there were others whose story needed to be told: high achiever Montrail “Money” Brown and recently paroled Chavis Daniels.

However it’s Bill that really sets this apart from is fictional relatives as, even though he doesn’t have as much charisma as Samuel L Jackson in Coach Carter, it is his passion which makes the audience engage. Watching him balance his work, family and voluntary coaching life underlines his flaws; however it is these that show his humanity more than his fictional counterparts.

This is a beautifully crafted piece and intertwines the stories of four people together by a mix of interviews, team meetings and practices which are segmented by the matches. It is a joy for all sports fans to watch.