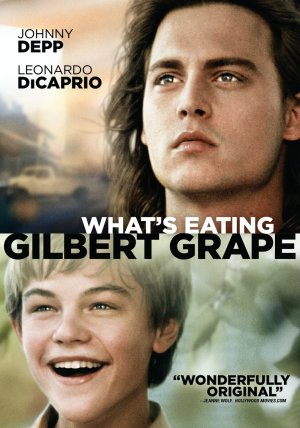 
Depp and DiCaprio star, but what is Gilbert’s problem and why is it so enduring?

The Grape family plan an eighteenth birthday party for Arnie, a boy who was not supposed to live past ten years old due to brain damage. While a couple of travellers stop out in their small town, Arnie’s brother Gilbert is unknowingly pushed on a course he cannot change.

“Endora is where we are. Describing Endora is like dancing to no music. It’s a town where nothing much ever happens and nothing much ever will.” This narration by Gilbert introduces us to the town and is an indication of what is to come: large parts of the movie contain no real drama. Instead the characters are examined, stretched to breaking point by families and then left alone to get on with their business. However, this approach is gripping and very rewarding for those willing to observe the character’s small lives.

Gilbert Grape, played by Johnny Depp, internalises everything he experiences and lives a sedate life; he seems not to get anything from an affair and when in conflict with the family doesn’t leave the dinner table but repeatedly asks, ‘Can I please be excused?’ For an adult he is extremely restrained by his family and only seems to be excited and playful when he’s with his brother Arnie. This is a great demonstration of a life out of control and a brilliant character observation but Depp’s performance, although subtle, does come across as a little too restricted emotionally to really allow the audience to properly engage with him.

Leonardo DiCaprio however gives a career changing performance as a mentally challenged teenager. This is one of DiCaprio’s early roles and shows that he is much more diverse than the powerful lead protagonist figures he has challenged himself to play more recently. His continual ticks: rubbing his nose, screaming uncontrollably and joyfully hiding in trees, are all memorable and ensured he was nominated for a Best Actor in a Supporting Role at the Academy Awards.

As well as family restrictions, obesity is also an issue of the film especially the perception given to the Grape mother by the town. Kids cycle by their house to get a look, and even Gilbert has a negative opinion of her as if he is both embarrassed and let down. In real life, actress Darlene Cates had previously not left her house for five years due to obesity so playing the role of mother helped the character enormously in adding a realistic presence. This subject of weight is handled well with a complexity between characters that never feels completely certain or resolved.

This is a coming of age film for an adult who never got the chance to truly come of age, and with its small-scale character analysis What’s Eating Gilbert Grape is still enduringly relatable.