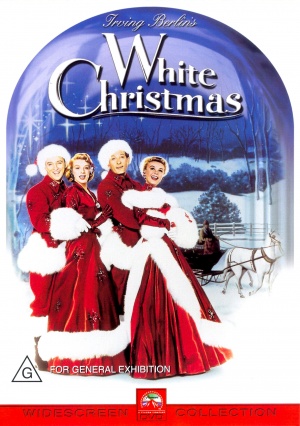 
Has White Christmas had its day or does it still sing and dance in the Christmas film spotlight?

As famous show producers, Wallace and Davies head to Vermont for the holidays and bump into their old General from World War II. To put on a top dollar show and make Christmas special for their ex-army superior, they need to keep the their plans to help out his financial difficulties a secret so he doesn’t cotton on.

The absolute stand out features of this Christmas movie are the two leads, Bob Wallace and Phil Davies, played by Danny Kaye and Bing Crosby. The pair fantastically bounce off each other throughout the film, resulting in witty one liners and fluid dialogue to really drive the film and story that comes with it. One of the best examples of this is when they are down-dressing after a show and have a continuous stream of heated dialogue, while smoothly tossing canes, bow-ties and shoes to each other without ever blinking an eye. In more than one instance the pair become almost mesmerizing to watch, allowing a very smooth operation in what results to be a successful lead duo.

As opposites but in similar roles to the lead two are the female pair with Betty Haynes and Judy Davies, played by Rosemary Clooney and Vera-Ellen. Despite never having the gravitas of the lead pairing, they both complete a functional role by showing another side of the show-business, while adding depth by developing a romantic link with the men. This is important to drive the character’s engagement with the audience, especially in the later scenes where conflict about love and a misunderstanding plays an important role in the story-line.

Perhaps one of the flaws of White Christmas is the need to fill in a large portion of the film with continuous songs, dancing and shows. The earlier rehearsals are spread out and pass without a seconds thought, however the middle of the film is a host to around four or five in a row, each feeling a little forced for the large part of the film that they occupy. In the 1950′s this would have been a large draw to the audience and despite the continuous shows, all the songs are unique and will very likely be stuck in your head long after watching.

White Christmas contains everything a Christmas film should: it's light-hearted, fun, and above all endearing. Despite the old fashioned outlook on singing and dancing, this is wonderful American movie for the festive season and is worth a watch if you have two hours spare.