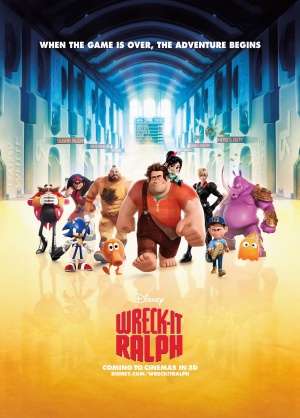 Ralph, who is desperate to get out of his dump where he is forced to live and be perceived as the ‘good-guy’ sets off on a quest to find a ‘Hero’s Medal’. Discovering other video game worlds, Ralph must ensure that he gets his medal to prove to the world he isn’t bad. “If you die outside your own game, you don’t regenerate. Ever. Game Over.”

From the very beginning, the film is rich with cameo computer game characters such as “Sonic The Hedgehog” and “Pac-Man”; something that generation’s of video gamers will be able to relate to. In addition to the referenced characters and games, the film creates two new video games, in particular the Sugar Rush game, that resembles a sweeter version of the Mario Kart series and would prove enough to give viewers black teeth and possibly even a sugar-induced coma.

With extensive experience in directing animated TV series’, like The Simpsons and Futurama, Rich Moore’s knowledge of character building to a similar target audience is evident, as displayed by the conflict between the majority of the characters, such as Ralph and Vaneloppe continually locking horns. This massively helps draw each of the characters into the story and adds more layers and depth to each of them, upping the connection with the audience.

Ralph is a character that the audience can easily attach to, with that bond only being made stronger by the direct nastiness of opposing characters, such as the Nicelanders and Fix-It Felix. This drives the story early on and provides Ralph the motivation to go against the grain and embark on his quest; despite Ralph crashing a party and destroying a cake, he’s never really seen as the bad guy in the situation due to the cruelty of the Nicelanders.

Ralph's story line alone includes enough of a brilliantly unique plot to keep the film moving; additionally, with Felix's quest to save Ralph as a comedic bonus and some brilliant additional characters, such as Vaneloppe and King Candy, it has all the ingredients to sit next to some of the best Disney movies around. Wreck-It Ralph can be enjoyed by viewers of all generations, however fans of video games will find it especially fun.