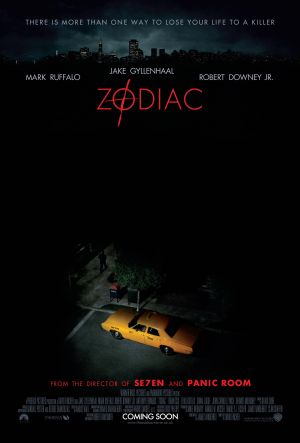 
Basing a film on real events can often create a great film, but is this true for the eery thriller, Zodiac?

In reality, Zodiac was a serial killer in North Carolina in the 60′s and 70′s, infamous for sending letters to the police about his kills and publicizing himself through modern media. The film ‘Zodiac’, is a detective story following the two main leads, Robert Graysmith (Jake Gyllenhaal) and David Toschi (Mark Ruffalo). Both characters live very different lives as David is an Inspector for the San Francisco police trying to catch the Zodiac whereas Robert is a cartoonist for the local newspaper, with an obsession for catching the Zodiac killer.

Many American detective movies are stereo-typically set in New York or Los Angeles, which is why San Francisco is a breath of fresh air. The dark and rainy complex of the city is in total contrast to the usually sunny and bright outlook (see The Pursuit of Happyness), which adds another dimension to the city. The moody and eerie backdrop evident throughout the film could be seen as a toned-down version of Millers’ Sin City.

In addition to this, Graysmith’s obsession for the Zodiac killer is never really explained throughout the film, generating an air of mystery throughout. Accompanied by Toschi, both characters keep the audience at arm’s length from immersing into their world.

As the film is set over a total of 22 years (’69 – ’91) large periods of time pass between scenes, sometimes up to four years. For a detective story based in limited locations, Zodiac manages to offer some excellent photography, like the sped-up construction of the Transamerica Pyramid to indicate the passing from 1969 to 1972.

If you enjoyed Zodiac, you are likely to enjoy the video game, Heavy Rain and Tinker, Tailor, Soldier, Spy.