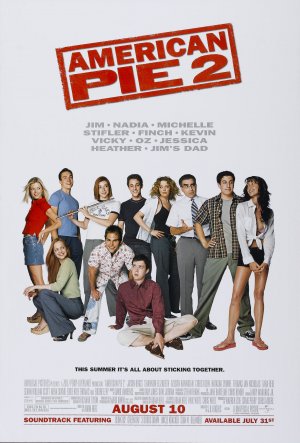 
Can this sequel match its predecessor in crass and sexually awkward situations or will it be a poor replication?

After their first year of college the gang reunite back in East Great Falls and decide they can’t last the summer in what has now turned into a place of boredom. So after an idea from Kevin’s brother they decide to rent a beach house, and with Stifler in tow they decide to make this a summer to remember.

The addition of Stifler into the core group brings an interesting dynamic by almost segregating Finch to become more isolated than in the previous film. With Stifler’s help the group become more outgoing and popular in the classic teen movie way; this allows their party plans to work more efficiently and with raised stakes their social ineptness brings more hilarity than ever. This change also gives Eddie Kaye Thomas space to cleverly round out Finch’s character and stay humourous through simple interactions with others; he is now a person trying to be original and discover himself but ends up looking in the most cliched place possible, Eastern religion, as well as keeping the pomposity that made the character in the first film.

Women in the original were regulated to the sidelines, however in this film Michelle finally becomes an integral character with the ability to play one half of an equal relationship. What’s more Alyson Hannigan manages to bring life to the role of Michelle with skittish excitement and a genuineness that is simplistic but makes the audience care about her and Jim.

Eugene Levy again manages to steal his scenes with an amazing performance as Jim’s Dad. He has managed to create a character that is both funny and extremely memorable, along with Stifler’s Mom, this is a good franchise for unnamed characters. His advice from the first film has been upgraded to become even more awkward; the scene in the hospital where he berates a woman for disapproving of Jim being stuck to a videotape shows his astonishing parenting level. He also has some stand out lines that add to his excellent dry delivery: “We’re awful proud of you son, don’t forget your penis cream”.