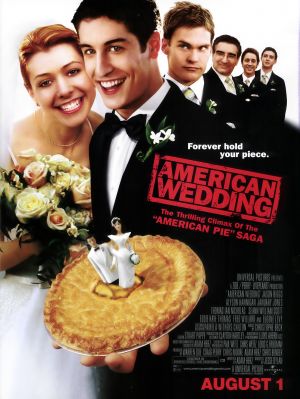 
A dance off in a gay bar and pubic hair covering a cake, what more can you expect from an American Pie film?

Jim has been dating Michelle for two years and decides it is time to make her his wife. After a clumsy proposal it is a rush to get everything prepared so Jim calls his friends, Kevin, Finch and even Stifler, to help. What could possibly go wrong?

Jason Biggs leads the cast again with the awkward style of comedy he has worked hard to perfect in previous American Pie movies as well as Amy Heckerling’s Loser. His performance has certainly improved, however he is still missing a certainty in his performance that is achieved by Eugene Levy who plays similar character, Jim’s Dad. Levy manages an assured performance of a character without confidence and he once again dominates all of his scenes.

One interesting aspect of this film is Finch and Stifler’s attempt to pick up Michelle’s sister Cadence played by January Jones. Using each other’s techniques Sean William Scott is finally able to flex his acting muscles impressively imitating Finch to perfection. Scott’s real achievement is balancing this Finch imitation with Stifler’s crass and foul mouthed nature and actually impressing women in the process. Unfortunately Eddie Kaye Thomas doesn’t do the same as Thomas’ performance lacks the witty edge it had over others in the previous films.

The only significant problem is the fact that the rush to get married is never properly explained. As a plot devise the rush in the action is integral to the humour but unfortunately with this missing information, which could have been a source of hilarity itself, the film doesn’t have strong groundings so doesn’t reach the levels of its predecessors.

This is the weakest of the franchise so far, with the plot hole distracting from the humour however it manages to keep laughs coming with absurd situations that only American Pie could get away with.