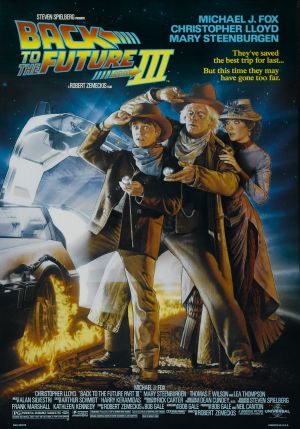 
Are gunslingers, a new romance and the Old West enough to outdo the first Back to the Future?

When Marty McFly discovers his friend Doc will be killed, he travels back in time to save him, not realising this could drastically change the future and also endanger his own life. He must get the Delorean in working order and distract Doc from his new lady friend to save history as we know it from disaster.

The Old West visually gives Back to the Future an edge over the second film, which was hampered by a future the audiences could never appreciate or familiarise themselves with. This film revels in its setting, using continuous clichés and film references such as McFly swinging the saloon doors open, having a duel and even calling himself ‘Clint Eastwood’ as an alias. This all combines to produce a much-needed revamp of a formula which was worryingly beginning to cover old ground in the second film.

Christopher Lloyd’s portrayal of Doc plays a bigger role in this film with him fitting more comfortably among the public in these surroundings to what has been seen before – he even sparks up a romance for the first time. Unfortunately however, this love interest does pull away from the smart and quick witted fun of the original Back to the Future by featuring a lot of eye gazing, mentions of mutual interests and gentlemanly acts.

The friendship between McFly and Doc is also shown in more detail than ever before with Doc writing a heartfelt letter to McFly about being a treasured friend. This continues with McFly’s efforts to save Doc and return to the West, which is cemented by their social interaction – previously they have been seen together only in private but Doc and ‘Eastwood’ are now seen to be pals about town experiencing everyday life amid their usual complications.

McFly’s own character is explored more as well with his weakness to name calling and ease of provocation always producing a negative consequence. McFly learns to resist the base instinct of being proud, and although this learning curve and Doc’s romance may slow the film down slightly, overall they show character progression and a more mature outlook, which suits the finale.

Back to the Future Part III offers a lot of new content to the series and, as a conclusion, rounds off the trilogy with style.