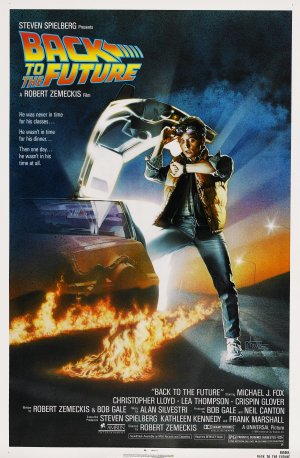 
What made a film about a teenager, a crazed scientist and a time travelling sports car so popular back in the eighties?

Back to the Future follows Marty McFly, a confident teenager who accidentally travels back in time from 1985 to 1955. After meddling with his parent’s timeline he must save his own existence by ensuring his parents go to a high school dance together, while seeking a way to get back to his own time.

For a film released in the mid eighties it has stayed surprisingly modern in its tone. This is largely due to the predominate setting of 1955, with jokes made about the time era appreciated by everyone who was born after. What’s more, the film has now taken on an iconic status with The Delorean’s appearance, now recognizable worldwide while the central group of characters are also memorable due to their stark contrast to one another.

Michael J. Fox is the perfect casting for the main character, Marty McFly, playing him as a cool, witty and confident seventeen year old rather than the nervous breakdown character you’d expect from a kid who’s at risk of destroying his own existence. Along with squirming at his mother’s obsessive crush of him, this all combines to become an entertainingly funny performance and doesn’t get slowed down by the seriousness of the situation, which would clash with the film.

Christopher Lloyd fits into the part of blabbering scientist with great ease; he provides a character which is larger than life and somewhat akin to something from a cartoon. This outward lunacy and two dimensional approach helps to disregard any questions which could be asked about the farfetched time travel plot central to the film.

The cleverest element to Back to the Future is the constant use of time references – whether dependant on story, such as the lightning strike on the clock tower, or minor references such as Major Goldie Wilson or Marvin Berry and his cousin Chuck. More than anything, this continues to entertain the viewer and keep the story fun and light hearted. One of the best examples is when McFly rocks out on a guitar and says to the audience, “I guess you guys aren’t ready for that yet, but you’re kids are gonna love it.”

Back to the Future is one of the best popcorn flicks of the eighties; it’s consistent at providing light hearted fun, clever references and has definitely stood the test of time.