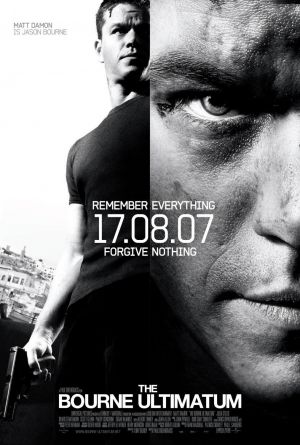 
With a predecessor which became an overnight masterpiece of the action/thriller genre, how does a studio go about finding something new?

The unfortunate answer is that it doesn’t try very hard. In fact it’s disappointingly deficient of new ideas; The Bourne Ultimatum centres once again on ex-assassin Jason Bourne, played by Matt Damon, who once again tries to unravel a top secret program named Blackbriar.

The same scenes are regurgitated in the form of a car chase which leaves an assassin incapacitated, Bourne cuts another woman’s hair and the film is even set at the same time including some of the same lines of dialogues as the second film.

The major intrigue of The Bourne Ultimatum is the new villain Doctor Hirsch played by Albert Finney. Doctor Hirsch helps reveal the enigmatic back story of Bourne due to his link to the early development of the assassin. As an older gentleman, Finney is perfect for this role as an intellectual opponent rather than a physical one, lending his charismatic presence to the role. Despite all of this, the Bourne back story and Doctor Hirsch himself seem like last minute add-ons to the franchise and appears an uncomfortable device to move the series forward.

Yes, this all sounds terrible and in some ways it is truly unimaginative but the saving grace of the film is its clever intertwining of the last films narrative adding more depth of character in a world of spies, assassins and politicians. In particular, Matt Damon offers a strong contained performance as the hero and Joan Allen once again plays CIA chief Pamela Landy with a brilliant mix of intellect and confidence – with her character she gives one of the best female thriller performances of recent years.

As noted, the major disappointment is that we’ve seen it all before; don’t be surprised to find major moments of déjà vu. But although it’s unfortunate the series wasn’t reinvigorated, The Bourne Ultimatum is still a strong stand-alone film. It has fluid pace, strong depth of characters, and great action set pieces.