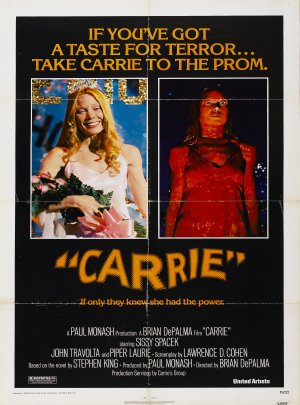 
Was the 1976 version of Carrie a trendsetter for scary reclusive schoolgirls dominating horror films?

When a high school recluse is bullied and teased, she realises that she has unique telekinesis powers. Feeling sorry for her, a popular jock asks her to the prom, only for the bullying to finally tip her over the edge with a humiliating prank.

Carrie’s most famous asset is its truly scary moments, and they’re enough to make the hair on the back of your neck stand up. This is particularly visible in the conflicts with her die-hard Christian mother, who violently forces her into a cupboard to read The Bible, or makes her stay in her room and not go out. On top of all this, Carrie’s reaction towards the end, which is visually disturbing, is accentuated with Brian De Palma’s choice to linger on shots and really drive home the uncomfortable moments.

Similarly to the original Texas Chainsaw Massacre released two years previously, Carrie plays on the slow aspects of the Horror genre, maintaining intensity from the get-go, until some truly unnerving moments occur towards the end. This slow burner is very well accomplished and takes its time to build the characters, which is a refreshing change to many other horror films. This sets up the finale nicely and builds a powerful and strong crescendo, visually and audibly.

Portrayed throughout as a victim, Carrie, is fairly endearing; she’s constantly shown as a quiet and normal girl, trying to come to terms with her new-found power. This further forces the brutality of the bullying into the limelight, allowing the bullies to be displayed as more traditional villains and a pivotal element to the horror scenes later in the film. When these scenes do kick in, Carrie completely changes and seems almost possessed as and she walks around incredibly slowly with wide creepy eyes, evidently using her telekinesis powers.

As a slow and methodical thriller, Carrie certainly excels in its intensity especially in the scenes with her mother, and the scenes towards the end. It's these moments that really set the film alight and develop it into a frightening 70's horror film.