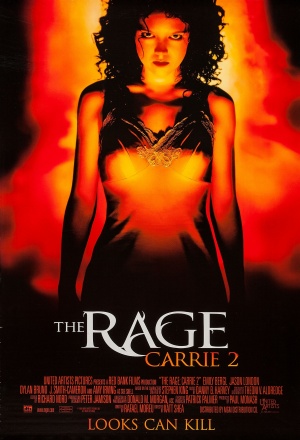 
Can the franchise’s second outing prevail without the title character?

Twenty years after the events of the original Carrie film, Rachel Lang is a high school recluse and the target of a group of bullies but one of them seems to be falling for her. After she begins to let her guard down she realises that she’s fallen into a trap – a dangerous situation for all around her.

In one of the opening scenes a stereotypical array of school characters are displayed: with jocks, cheerleaders and musicians to name but a few. Unfortunately, the film never really develops this further, with a lot of the supporting cast simply falling into these cliché groups. The lead is set up as a no-nonsense, tough character with lines like “I don’t cry” in the opening scenes, but she quickly sheds this hard exterior and becomes the helpless, dumb victim; it would’ve certainly been interesting to see the outcome of a tougher character throughout the situation.

The Rage: Carrie 2 forces connections with the original Carrie, even including Sue Snell, one of the original characters. As far as sequels go, it’s often important to maintain links with the original film, fortifying the set up and developing the story; however, with poor previously used characters included, it never creates a scenario that develop them enough for the viewer to get truly involved.

Similarly to the first film, horror aspects are largely kept to a minimum until the final few scenes, while small scale para-normality is massively highlighted early on with saturated hues and twisting camera angles. Due to this restraint in horror aspects, The Rage really tries to highlight these moments, but poor execution leaves it wanting, and fails to make any of it unnerving, unfortunately leaving it feeling more like a high school teen flick about the popular guy getting with the un-popular girl.

The Rage: Carrie 2 obviously paid close attention to some of the best sequels around, by intertwining past characters and attempting to stick to a similar story but with a new twist. Unfortunately however, none of the new characters really develop any interest, while leaving a lot to be desired with a rehash of the old storylines. A poor follow up to a fairly established traditional horror film.