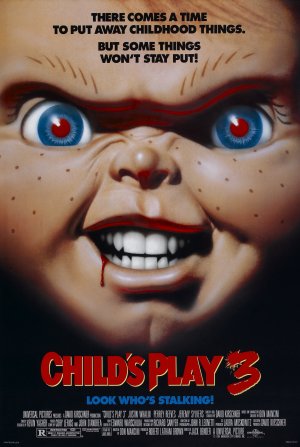 
Take three for the Chucky franchise; bored yet?

When Chucky gets recreated once again, he attempts to find Andy and steal his soul so he can become real. As Andy moves to military school, he’s discovers that neither he nor the other children are safe from the evil doll.

The film is mostly based at a dark and dislikable military school and throws up one instant problem, which is enforced within the first five minutes: none of the characters are likable. While they’re obviously portrayed this way – an example of this is the military barber: “The Romans invented the military cut. So their enemies couldn’t grab a hold of it in battle and slit their throat.” – it doesn’t offer a helping hand in engagement or gathering empathy. Most of the characters (with the exceptions of around four) are completely horrible, leaving you as the viewer willing them to fail or get killed, with them usually taking up more screen time than would be preferred, and filling the role of the villain instead of the more interesting evil animated murdering doll.

The film follows the trend of the franchise fairly well, but now on the third film this begins to feel too familiar and largely diminishes any substantial interest; it’s inevitable how it’s going to end and the next film re-start. Not being able to shake off this feeling is a large ball and chain for the progression of the film, and even hinders it towards the end, with Chucky seeming invincible.

Saying that, Chucky as an antagonist is brilliant in his pursuit for Andy; he constantly seems to offer a fresh, and often clever, approach to the traditional hunting and killing spree. This is seen mostly in scenes like when he controls a number of toys in a dark corporate office to perform a kill or swaps out paint-ball ammunition for live rounds on a training war exercise. It’s these kind of instances that create the best moments in a film that’s largely let down by dominant side characters, in a similar fashion to the original Child’s Play.

Child's Play 3's major downfall is the similarities with the previous two films and its failure in creating a unique story; fans of the previous films wont find anything new in it, but people unfamiliar with the franchise might take a little enjoyment from the continued rampage of the doll. Either way, a new direction is much needed.