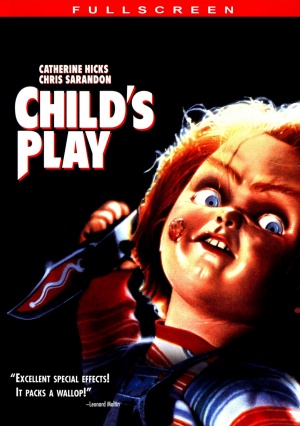 
What’s really that scary about a human sized doll that comes to life and wields a knife?

When Andy is given a child-sized doll, Chucky, for his birthday, he doesn’t realise that the soul of a criminal has possessed it. Chucky needs to find a way out of the toy’s body or risk being stuck there forever.

With Chucky playing a large part of the film as a static doll waiting to explode to life, there’s not really any room for many scary or gory moments. Instead it relies on the intensity of knowing that he’s really alive, while the characters go about their daily lives with unexplained happenings. This is mainly displayed with point of view shots and the doll’s head slowly turning without anyone noticing. However, this is completely turned on its head towards the end when the living doll is set on fire, resulting in a terrifying burnt 3 foot doll walking around the apartment with a melted face and carrying a knife. Put simply: it’s enough to keep you awake at night and will make you think twice about burning toys ever again.

Chucky’s owner, Andy, is played with an extremely similar character style as Eric Lloyd’s Charlie in The Santa Clause franchise: he constantly complains and moans about people not listening to him. But this in added to with an innocence that works particularly well when countered with such an evil doll. Apart from this, the cast mostly fail to add any substance to the non-plastic beings, with a mother who doesn’t even attempt to believe the boy (who seriously believes their young child is a murderer without exploring any other avenues?) and a police officer that frustratingly ignores any clear signs or pleas for help from the other characters.

While Child's Play excels with the genuinely creepy character of Chucky and toe-curling slasher scenes, it's largely let down by the rest of the cast and non-enjoyable grown up actors. If any franchise could maybe get away with this, it would be one that mostly revolves around a non-living being, but with a large amount depending on the living cast it unfortunately fails to deliver on a grand scale.

What did you make to the first film in a long running franchise? What's your favourite moment of the film? Let us know in the comments below.