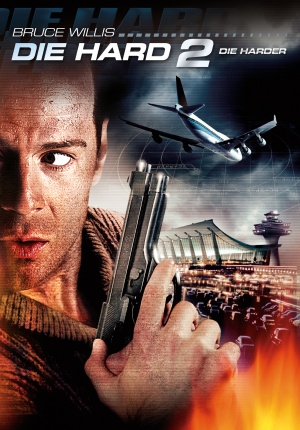 
Is replacing a skyscraper with an airport enough to continue the success of the first film?

When terrorists take over an airport to intercept an imprisoned drug lord, John McClane is determined to stop them with the help of a janitor, a snowmobile and his New York cop sensibilities.

Die Hard 2 copies the same formula as the first film with John McClane caught up in the middle of a terrorist attack with most people telling him to not get involved. However, this isn’t necessarily a bad thing, with enough changes clearly made from the first film for this story line to be interesting and the plot engaging. The action sequences are elaborate and often ludicrous with a plane crash, McClane fighting in an airport luggage room and a snow mobile chase scene to name a few. Even with tongue-in-cheek moments, there is no point where these scenes feel out of place or forced unlike so many action-seeking movies.

Unfortunately Die Hard 2 doesn’t include a villain that lives up to the clever mastermind Hans Gruber from the first film. Despite an obscure introductory nude yoga scene to build up Colonel Sadler’s might and strength he fails to deliver a strong formidable opposition to McClane. Disposable henchmen are a must for most action films, but never throughout the film does it feel that our hero will fail to overcome the weak and boring villains.

One set back is the lack of a decent physical fight between McClane and Sadler aside from the quick squabble on a moving plane’s wing; if the villain is going to be portrayed as a strong, physical baddie then a fight is almost essential. This absence of strong villains in combat doesn’t represent an exciting and difficult challenge for McClane and ends up portraying the villains weaker than they were likely intended to be. Luckily the film doesn’t suffer too much due to McClane’s constant humour and complaining that entertains while he fights his way through disposable henchmen.

Die Hard 2 is a solid replay of the 1988 original, but what it loses in lack of a decent villain, it more than makes up for with cracking action scenes and a focus on the ballsy, larger than life hero, John McClane.