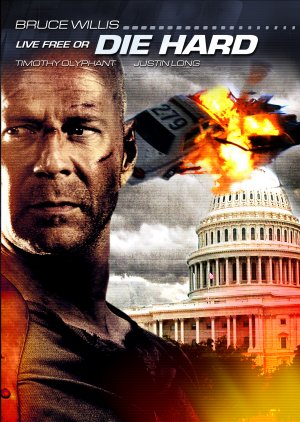 John McClane once again finds himself in the wrong place at the wrong time and must team up with hacker, Matt Farrell, McClane to bring down cyber-terrorist, Thomas Gabriel.

Live Free and Die Hard begins to see a new role emerge for McClane, allowing him to mentor his new, younger partner,where in the previous film McClane and Zeus both acted like lead characters. This is an inevitable change to the franchise, with Bruce Willis hitting fifty-two years old in 2007, allowing younger roles like Farrell to run around and help McClane out. Farrell’s inclusion helps the film progress by wrapping him into the main story however it never feels like his character will be remembered or thought of in future sequels.

Unfortunately with a modern action flick the passion that Willis brought to the role previously seems to have diminished, with much of the film feeling like McClane doesn’t want to save the day. Instead he seems to be doing it because he’s bored of normal police life, “because there’s no body else to do it right now, that’s why. Believe me, if there were somebody else to do it, I’d let them do it, but there’s not.” McClane’s lethargic role does however bring the opportunity for him to open up and talk about his failed marriage and children adding a much needed relatable side to our hero, especially with his wife absent from the film. “You know what you get for being a hero? Nothing.”

Despite Willis not getting any younger, the action scenes are still as elaborate as ever; an example of this is when McClane launches a car into a helicopter, resulting in a large explosion and ending with McClane saying “I ran out of bullets”. As we’ve seen many times before in its predecessors’ equally silly action sequences, it never feels as if these moments are out of place.

Farrell fails to fill Zeus’ shoes from the third film and despite Live Free or Die Hard successfully stepping into the new era, it seems McClane as a character is slightly struggling. As the weakest in the action series to date, it’s a disappointing film especially after such a strong predecessor 12 years previously.