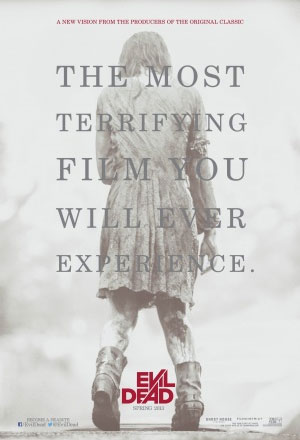 
Does this Evil Dead remake appeal to the same audience 30+ years on?

Similarly to 1982′s The Evil Dead, a group of twenty-something’s go to a cabin in the woods, only for one of the group to read the book of the dead aloud to raise zombies from their grave.

New director Fede Alvarez’s version centres more around Mia, who, with the group’s help and an isolated cabin, is trying to shake off her addiction to drugs. This creates interesting character interaction, with the other members of the group relating her apparent zombie sightings with going ‘cold turkey’. This narrative device and clear reason to visit the cabin are a few new aspects to the franchise transforming it from a tongue-in-cheek gore-fest to an obvious horror franchise.

Extreme gore is very much still present and the film is scarier than the original – a fine example is the scene where Mia is chased by a zombie, which inevitably turns in to a chainsaw induced battle. In comparison to previous Evil Dead outings, modern horror films hardly utilise cheesy lines and this is apparent here.

The early scene displaying previous zombie outbreaks, allows Evil Dead to be set up as a new film, a remake or as a sequel to previous films in the franchise. The same can be said about the expected protagonist, David, neither recreating nor succeeding Ash. A clear trend in Evil Dead film’s is the protagonist’s character strength and almost hero status which is something sorely missed in this modern version. In comparison, David is cowardly and lacks the reasoning to face the truth, allowing Mia to strengthen as his sister and a lead character.

Evil Dead differs substantially from the original film, despite carrying the same name and very loosely sticking to the same plot. The light-hearted, comedic scenes of Raimi’s The Evil Dead are almost non-existent, creating a much more serious and modern twist. If you enjoy serious, modern horror films, this is the one for you; however if funny, blood-everywhere cheesy films is your bag, I’d stick to Raimi’s films.