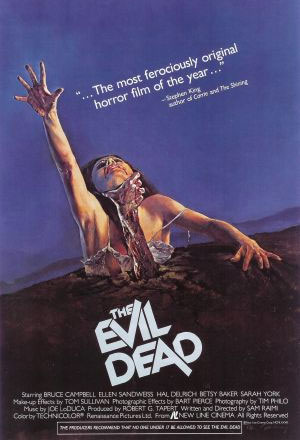 
With The Evil Dead’s reputation, it’s a serious contender for the most loved horror movie ever. Does it deserve that accolade?

This film opens predictably with a group of young, foolish adults making their way to a remote location, in this instance, a small shack in the forest. As the two men of the group, Ash and Scott head down to the cellar to discover a book and tape recorder, which bring the evil dead back to life.

The film takes a route that many horror films don’t – as soon as the first possessed zombie appears the film explodes with living dead creatures on the screen every few minutes. Ignoring any suspenseful build-up to a finale, the film becomes a gore-fest where the majority of the (seemingly dispensable) group, will inevitably die.

The Evil Dead is generally considered one of the best horror movies ever made, an accolade gained mainly due to Ash Williams (Bruce Campbell), the film’s hero who makes the film cheesy and accessible to non-horror fans. The endless list of in-the-moment quotes makes this film difficult to take seriously, leaving the viewer laughing out loud not something expected in a typical horror: ‘We can’t bury Shelly. She’s our friend.’

Despite this, The Evil Dead still primarily belongs to the horror genre, and for good reason. When Ash’s girlfriend, Linda, is transformed into a possessed-zombie she laughs uncontrollably while sitting, with her legs folded. By continuously swapping her character from demonic to angelic, this scary scene attempts to add another caring and loving angle to Ash; let’s just say he doesn’t respond in a loving and caring manor.

On the whole, The Evil Dead is an enjoyable film for horror addicts and, at the very least, a funny film for non-horror fans. However, at the end of the day the film is a horror and despite the comedic moments (and there are many), it’s a scary film at its core.