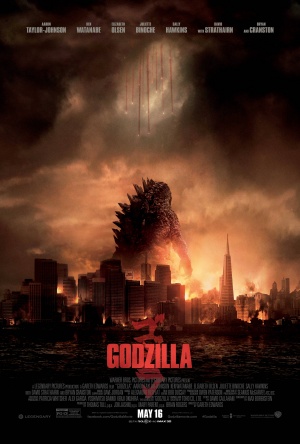 
Is a new direction needed after the previous 1998 production?

Lieutenant Ford Brody is in the wrong place at the wrong time when nature sends Godzilla to restore the balance against two monstrous breeding creatures that threaten mankind.

A lot of talk pre-release was about Bryan Cranston featuring but that’s a little overplayed as he’s not actually in the film a whole lot. Aaron Taylor-Johnson’s Ford Brody is the main protagonist in the chaos and handles it well, even if his character is a little predictable in the action role; he’s a bomb disposal expert in the Navy, a modern day action man and has a young family. Yawn. He obviously plays an important role in the film and Taylor-Johnson does it very well, but what’s up with all these identical characters with the same backstory? Anyway, this film is all about Godzilla and boy is he brilliant.

It’s great to see what a big budget studio can achieve after so many low budget productions with a man in a Godzilla suit. The previous 1998 version didn’t go down too well with fans of the franchise, particularly as it was more of an oversized T-Rex with feelings than a huge monster, but this isn’t the case here. Godzilla is back to being a huge force to be reckoned with and the great build up to his introduction is really helped raise hairs when he finally does get involved. The magnitude of his arrival is conveyed fantastically without him really being destructive; instead the two ‘baddie’ monsters smash and crush buildings and humans in epic scenes. Despite this, Godzilla does inadvertently create a tsunami which still shows who’s really in control.

One of the only major flaws to the film is the opening twenty to thirty minutes which completely slows pace and proves more functional then enjoyable. The story is set up, the characters are introduced, and the film then jumps to the present day only to introduce the story and characters again but all grown up. Only after that do the monsters even begin to get discussed and then things start happening. By now, the excitement from the opening montage of historical nuclear activity and Godzilla sightings has passed. The opening scenes are devised to set up the characters, but with little character interest after this it’s a little lifeless to say the least. However saying that, the last thirty minutes make up for this tenfold when Godzilla starts whooping butt and has a hugely destructive monster battle. This is where the creators obviously took inspiration from the Japanese films with an extremely brutal and enjoyable fight to the death.

I’m slightly disappointed that it wasn’t up to my high expectations, but that doesn’t mean it’s not a good film. And even though Godzilla does take a little while to get going, the final thirty minutes more than make up for this and some.