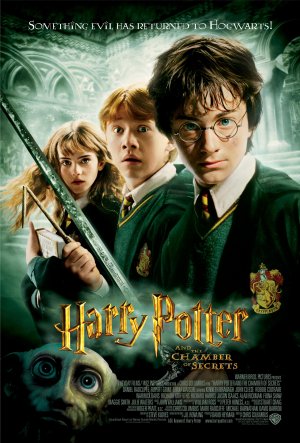 Harry Potter and the Chamber of Secrets (2002)


As Harry Potter enters his second year will it be more of the same from the magical franchise?

More of the same comes from the director Chris Columbus who brings a childish enjoyment and a sense of mild peril to the film. The wizarding world created in the novel is brought to life with the same wonder and fun that Columbus brought to his previous film Bicentennial Man. The mild peril is best shown in Harry’s journey into the Chamber of Secrets, where the use close-up shots and the fear in his eyes shows how Columbus has brought on the young actors abilities on to bring his vision to the screen.

Due to Harry’s actions in the first film there is a need for a new defence against the dark arts professor and this comes in the form of the irritatingly smiley Gilderoy Lockhart, played by the wonderful Kenneth Branagh and he fits in with the calibre of actors that they have cast as the teachers at Hogwarts. The skills he honed at The Royal Shakespeare Company are clearly evident as his character unravels and you see both sides of this famous wizard.

This film is an improvement on the previous and Daniel Radcliffe makes a better Harry than in the last film however he is still being led by his more experienced co-stars.