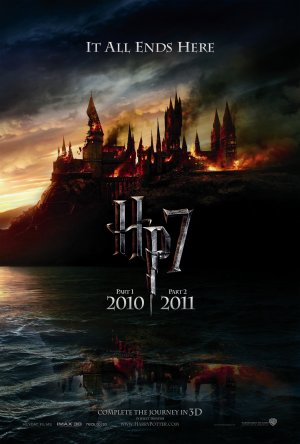 
The seventh and penultimate film in the Harry Potter series brings war, but will the reality of war ruin the fantasy elements?

Starting the film with Rufus Scrimgeour (Bill Nighy) addressing the wizarding world with his “These are dark times” speech, performed with a calm voice much like Churchill in his “Their Finest Hour” speech, you know that this film will be far from the comfortable magical adventure of the Philosopher’s Stone.

The scene with Voldermort and his axis of evil underlines the calibre of actors the franchise has managed to get round its table. This is one of the problems with the film: there are too many famous faces playing cameo parts which can be quite distracting. Peter Mullan as Yaxley does a good job of being memorable with very little screen time, as does ‘The Boat that Rocked’ actor Rhys Ifans, as cooky Xenophilius Lovegood.

This film focuses mainly on Harry trying to stay away from Voldemort with Harry destroying Horcruxes and killing different parts of his soul, which are entrapped in different objects of magical importance. A minor point is that there is no recognition or regret when they are killing somebody.

There are not many filmmakers that would include a separate short film in the middle of a blockbuster but the animation of The Three Brothers, directed by Ben Hibons, is a real joy. With a simplistic design and a straightforward narration by Emma Watson the animation helps bring the story to life without dragging the rest of the film down.

The main issue with Deathly Hallows Part 1 is that it is a ‘Part 1,’ with the ending to the film lacking enough power to conclude confidently, despite the death of a lovable character. Perhaps Part 2 will be stronger.