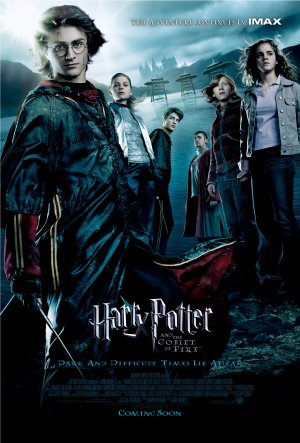 
With a rom-com director, big action sequences and source material three times longer than any before, will this mash up work?

Again there is a new director helming the project, this time in the form of Four Weddings and a Funeral director Mike Newell. As the three leads approach adulthood there is love in the air, this appears a clever move. I have previously used the term leads to describe the performances of Daniel Radcliffe, Emma Watson and Rupert Grint, but this film marks a departure where their performances merit this distinction.

Surprisingly, for a director associated with rom-coms, the actions sequences of the tournament challenges were extremely enjoyable as Newell implemented tight face shots which resulted in emotional and engaging segments.

One weak point of the film is just how much has been included, which creates an intense pace from scene to scene. This pace only slows down at the challenges with emphasis on visualising these; however even the first two challenges are stripped down to the bare essentials, imagine how long and tedious the film could have been if they hadn’t excluded the Dursleys and the House-Elf Liberation Front.

As well as a new director we have a new defence against the dark arts teacher Alastor “Madeye” Moody played by Brendan Gleeson, showing not only his skill as an auror but also his integrity for an equal fight. The scene where he disciplines Malfoy shows best how he plays the role with an unhinged aggression that fits well with the old warrior type character he is.

With the introduction of the death eater there is the chance of a great design; however they went for a Klu Klux Klan knock off with skull masks. This simplistic design comes after the visual feast of the Quidditch World Cup and before the great designs of the dragons and the mermaids.

With so much story crammed into the film the writing isn’t as developed as the previous films. Despite this, the performances of the actors help raise it to a similar level as Prisoner of Azkaban.